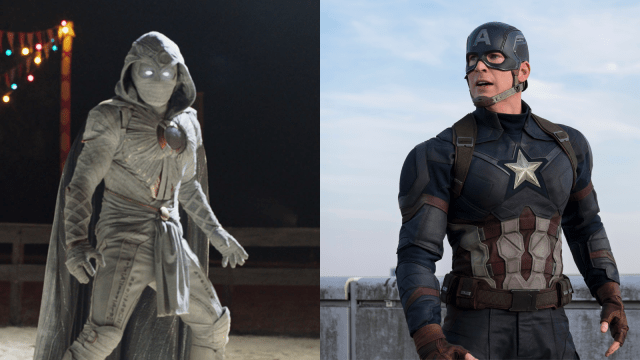 Fans believe they’ve pieced together a huge connection between Moon Knight and the star-spangled man with a plan, Captain America with a new fan theory.

Moon Knight made his live-action debut in his eponymous Disney Plus series, and while it took liberties with some of the original source material, one thing it kept was the names of the Lunar Lunatic’s alters names. Marc Spector, Jake Lockley, and Steven Grant.

The latter of which could have much larger implications than many would think. Redditor /u/jumpy_dragon7759 has delivered an exquisite and smart theory on the truth of Moon Knight’s identities names.

The theory notes that in-universe, Marc Spector develops the alter of Steven Grant from a fictional Indiana Jones-esque archaeologist from a series called “Tomb Buster”. But how did that film series get its name for the hero? Look no further than the first Avenger.

It makes perfect sense, isn’t too fan-service-y, and also is a subtle bit of worldbuilding. So often in the Marvel Cinematic Universe the foreshadowing, call-backs, and references are as subtle as a sledgehammer, but not here. After Ms. Marvel, we learn that the public does indeed idolize the many Avengers and heroes of their universe, so it only makes sense that Earth-616 would make tributes to their heroes in film.

Moon Knight introduces the third persona Jake Lockley in its epilogue, teasing a second season which will more than likely happen soon: even if Oscar Isaac said there’d only be one season back in Feb. 2022.