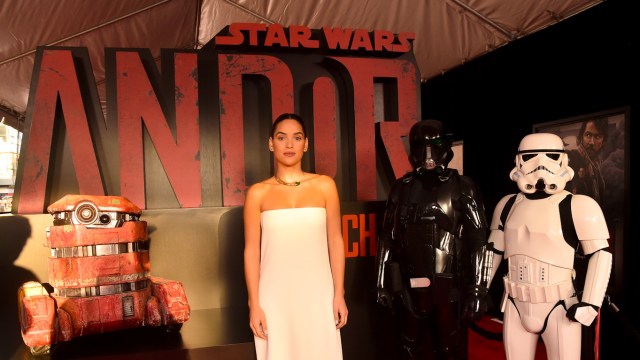 Adria Arjona couldn’t help but feel overwhelmed from time to time while shooting in the immersive galaxy far, far away set of Andor.

Arjona portrays Bix Caleen, a black market dealer who helps Cassian Andor out when he finds himself in a rough spot. Bix might have a tough outer shelf, but audiences have easily seen through that facade and noticed the gentle soul within.

Now, in a recent interview with Digital Spy, Arjona says she’s nothing like the street-hardened character she portrays on the show, especially when it comes to taking in the gravitas of being in a Star Wars project, revealing that she hasn’t gotten used to it by far.

“Everything around you is so Star Wars-y. You sort of get overwhelmed by it, and get nervous by it. But you sort of have to be like, ‘No, I’m telling a story that just happens to take place in a galaxy far away.’ You need to focus yourself. That was challenging, also, because you get so excited between takes. You see a creature act, and you’re like, ‘Oh my God, this is the coolest thing,’ and you want to take selfies with him. And you’re like, ‘No, Adria. Focus! You’re playing Bix.'”

As to what’s next for Bix, Arjona hopes that viewers will look to the newly introduced characters with an open mind, describing Andor as a “complex show” with a lot of different messages “ingrained” throughout it.

Andor returns tomorrow with its fourth episode on Disney Plus.