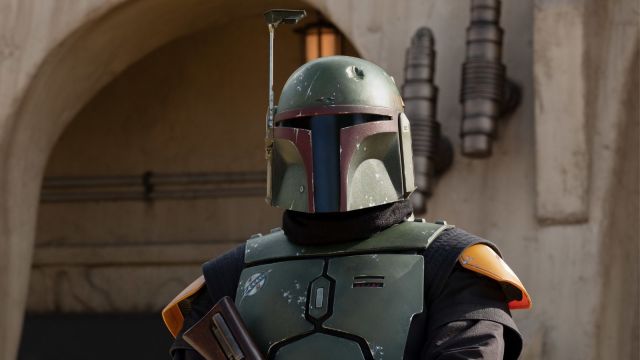 We’re now less than two weeks away from Halloween, and those seeking to provide something special for local trick-or-treaters are busy beavering away on costumes, scenery, and stocking up on all manner of delicious candy. But at least one neighborhood is in for a very special night, thanks to an insanely talented Star Wars fan who’s gone the extra mile.

Reddit user imabarroomhero will be turning his garage into Jabba’s Palace as seen in The Book of Boba Fett. He’s constructed an impeccable screen-accurate throne, and will be sitting on it in full armor as Mos Espa’s Daimyo.

The replies are loving it, though some feel that the setup would really shine with a bit of company:

Others say that for the sake of the kids, keep the Rancor at bay:

Maybe the Fett seen in the show might actually do this:

We can’t resist a good pun:

This is a very good point:

The Book of Boba Fett might not have been the best Star Wars show on Disney Plus, but it was far from a complete disaster. Since it wrapped up last year, fans have been wondering whether we might one day see a second season. However, seeing as it was intended as a quick stopgap to fill the void between The Mandalorian‘s second season and Obi-Wan Kenobi, its return is rather unlikely. That being said, we expect Temuera Morrison’s Fett to reappear in The Mandalorian season three in some capacity.

If the show did return, we’d love to see a story that properly gets into the murky depths of the Star Wars criminal underworld. The Crimson Dawn storyline established in Solo still hasn’t been resolved, so Fett tangling with Emilia Clarke’s Qi’Ra would be a fun new direction.

Whatever else happens, we wish we were getting our Halloween candy from Boba Fett!