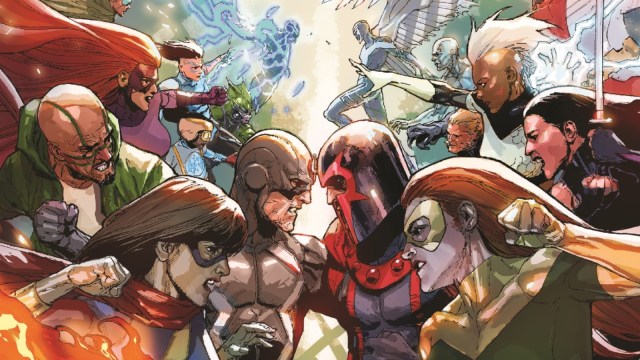 The topic of whether Inhumans and mutants are the same has been debated for a long time, and it’s still a discussion happening today. Both groups involve superpowered individuals whose genes give them a wide range of abilities, but there are important differences as well to be addressed. With the MCU introducing these concepts in phase four, and with the conclusion of Ms. Marvel opening up more mutant possibilities, there’s no better time than now to flesh out exactly who they really are.

Both X-men and the Inhumans were created around the same time. The first issue of X-men was released in 1963 and Inhumans appeared just two years later in Fantastic Four #45. The former became the more popular franchise of the two, and “mutant” has become essential language in Marvel’s lexicon on top of being attached to one of its most recognizable franchises. Inhumans is a more elusive concept and not as well-known as mutants have become. Despite this, the Inhumans play a major part in Marvel’s history and without them, the universe wouldn’t be the same. Since X-men came first, it’s best to start there to get a better understanding of the topic.

Mutants and the X-men origins

Mutants are beings born with a genetic mutation called the X-gene which gives them superhuman abilities. Typically, these abilities manifest around puberty, but at times they develop later in life. The first known mutants were documented more than 1,000,000 years in the past and included Phoenix, the cosmic entity that notably takes over X-men telepath Jean Grey. Mutants survived through the Hyborian Age, biblical times, ancient civilization, and on through the centuries to reach the modern age, and have had to deal with many trials and tribulations from society in their fight for equality.

The X-men are the most notable team of mutants. Led by the powerful telepath Charles Xavier, they seek to save the world and change people’s minds by using their gifts for good. It all starts with five superpowered teenagers, Cyclops, Marvel Girl, Beast, Angel, and Iceman, and expands into an entire academy filled with mutants seeking to learn how to use their powers. They often battle Xavier’s friend and archnemesis Magneto, a mutant who can generate and manipulate magnetic fields, who has all but given up on humanity and chooses to fight back against their abuses.

The Inhumans on the other hand are extraterrestrial-based. Instead of their genes developing through evolution, 25,000 years in the past these were humans who were genetically engineered by the Kree, a militaristic race of aliens from the planet Hala, for the purpose of using them in battle. The humans who were experimented on had longer lives and their strength increased, but the Kree eventually abandoned their experiment, leaving the altered humans to fend for themselves in a cruel world. After centuries of oppression from humanity, the Inhumans became a society unto themselves.

They were first ruled by King Myran who settled in the city of Attilan located in the North Atlantic Ocean off the island continent of Atlantis, and constructed a protective dome around Attilan, cultivating their landscape. The geneticist Randac discovered the Terrigen mist, a gaseous mutagenic substance that unlocked the superhuman potential within humanity, in the cavern beneath Attilan. “Terrigenesis” evolved people into greater beings, but it also risked mental damage.

The Similarities and Differences

On the surface, there are notable similarities between the Inhumans and mutants. Both groups’ sets of genes evolved beyond that of normal humans, and because of this, they have amazing abilities. Both entities have teams that use their abilities for good and evil, with Professor X leading his X-men, and Black Bolt, the mightiest of all Inhumans, leading his Royal Family. They’ve also both created their own communities for protection: the Inhumans with Attilan, and the mutants have Xavier’s Academy. The differences are significant, however. The X-gene is naturally occurring, and though the Terrigen mist can alter DNA and give people superpowers, there’s a great danger that they could be harmed in the process.

Inhumans also tend to be stronger than mutants. Omega-Level mutants like Magneto, Legion, and Storm stand a better chance at matching up against them, but overall the Inhumans are godly. Black Bolt’s master blow, for example, can destroy mountains and even stripped Thanos of his armor (though he was defeated by the Mad Titan). The power ranges of mutants tend to be more diverse. Some powers are relatively harmless while others are massive.

Inhumans and mutants are like siblings in a way, closely-related with distinct attributes setting them apart. In those respects it’s easy to compare them, but in terms of their civilization structure, their evolutionary origins, power levels, and the effects their powers have on them, there’s a world of difference. As the MCU continues to forge ahead, there are likely to be more discussions about Inhumans and mutants coming our way.