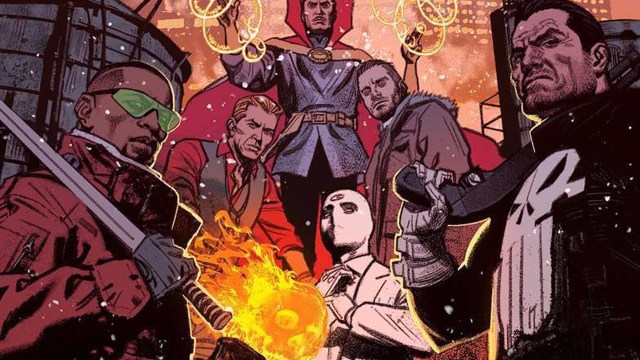 There are various new super-teams on their way to the MCU — the Fantastic Four, the X-Men, the Young Avengers, etc. — but one that’s bubbling under the radar somewhat is the Midnight Sons. With the influx of supernatural superheroes we’ve been getting lately, it seems likely that this group of characters from the darker end of the Marvel universe will assemble soon (if not in Phase Five, then in Phase Six).

But who could be part of the team? Redditor u/TheOneGinger1 shared some atmospheric artwork of their own making that pitched their personal dream roster for the Midnight Sons. In this fan’s eyes, the team would be almost an expanded version of the Defenders, including Daredevil, Punisher, and Iron Fist, along with the likes of Blade, Moon Knight, and the Helstroms, who have all served on the squad in the comics.

Other fans responded positively to this heavyweight roster, although one commenter had a neat idea for a streamlined take on the team that reflected the classic types of monsters. Namely, Blade, Moon Knight, Ghost Rider, Scarlet Witch/Agatha, Werewolf by Night, and Man-Thing.

Someone else reminded us that Kit Harington’s Black Knight may end up as a Midnight Son thanks to Mahershala Ali’s audible cameo in the Eternals post-credits scene.

Doctor Voodoo is another strong contender, considering the way Doctor Strange laid the groundwork for his arrival.

Oscar Isaac has teased the coming of the Midnight Sons on multiple occasions at this point, so we’re pretty sure Marvel has got something cooking on this front. Especially with the Werewolf by Night Halloween special hitting Disney Plus this Oct. 7, which will introduce not just Jack Russell but also Elsa Bloodstone and Man-Thing to boot. Whether the ultimate roster will look anything like this, though, it’s too early to say.