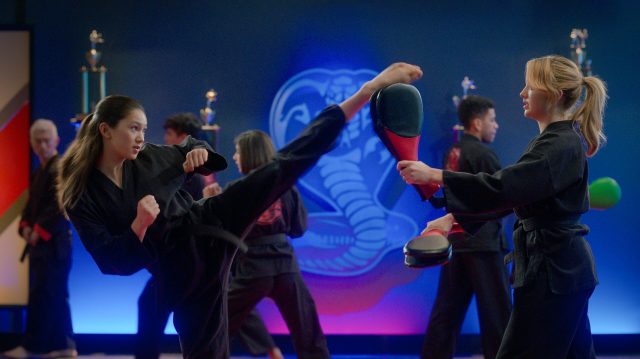 Cobra Kai never dies and the show’s fifth season is proving that after finding massive Netflix success during its first week.

Netflix has shared its official viewership data between Sept. 5 and Sept. 11 and taking the top spot is none other than The Karate Kid sequel series absolutely dominating the competition.

The show dropped its latest season on Sept. 9 and in just two days it managed to rack up more than 100,000,000 watch hours. The total count of 106,700,000 is more than 40 million higher than its closest competition Netflix’s Devil in Ohio which remains on the charts for its second week.

Other newcomers for the week fell short with The Imperfects debuting at number three with just 24 million hours watched and Dated and Related trailing just behind at 19,800,000 hours binged between the dates.

The Sandman has descended down the charts since its dominant reign but still managed to retain a spot coming in at number five with 19.5 million hours watched during its sixth week on the charts.

Given that it only had two days to work it seems more than likely that Cobra Kai will put forward another huge effort in the next week’s Netflix rankings. The new season includes 10 episodes which all run for around 40 minutes meaning that fans have a ton of content to catch up on.

For those who haven’t yet dived into this massively popular world after The Karate Kid, the show has all five seasons available to stream right now on Netflix.