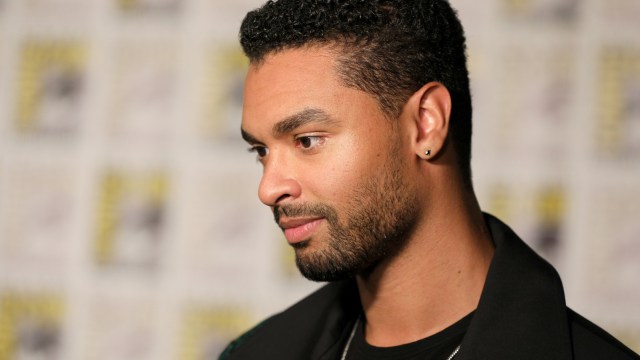 Regé-Jean Page is turning the page onto an exciting new chapter in his career right now, with the Bridgerton breakout following up his supporting stint in hit Netflix spy thriller The Gray Man with a key role in the upcoming Dungeons & Dragons movie. So when Marvel Studios revealed that he was joining the cast of 2023 Disney Plus series Secret Invasion, it hardly came as a surprise — an MCU role seemed inevitable for the increasingly ubiquitous actor.

But then something strange happened. After initially including Page’s name in the show’s cast, Marvel announced that they’d made a goof and the star actually wasn’t in Secret Invasion at all. The internet collectively shrugged at the weird mishap and moved on. But, just for a moment, let’s put on our tinfoil-plated conspiracy theorist hats and ponder the question… What if Page really is in Secret Invasion in a top-secret role and the studio let the news slip too soon?

So, wait, what happened?

Before we start theorizing, let’s recap what occurred during The Great Page Goof of 2022. After its grand panel at this July’s Comic-Con, Marvel released a press release for Secret Invasion which listed Regé-Jean Page among the cast — which includes Samuel L. Jackson, Ben Mendelsohn, Olivia Colman, and Emilia Clarke, plus many more.

However, the studio then quickly sent out another email correcting this supposed mistake. Likewise, Marvel’s official tweet announcing the cast similarly mentioned the previous error made about Page’s inclusion.

In all the excitement of everything else that Marvel revealed at SDCC, from Daredevil: Born Again to two new Avengers movies, fans let the issue slide. Yet, if you think about it, it’s hard to fathom how this strange slip-up could even occur. Why would Page, of all people, randomly be named as part of the cast? Unless, that is, he really is in the show.

Could he actually be in Secret Invasion?

So what we’re left asking is: Could Regé-Jean Page appear in Secret Invasion after all? One reading of what happened is that Marvel’s PR people listed the actor among the cast because he is indeed in the show, except that we weren’t meant to know this yet as he has a super-secret part to play in it. A different branch of Marvel then presumably spotted the mistake and an attempt was made to correct the damage.

Just as with Marvel’s movies, the MCU’s shows are full of cameos from surprise guest stars that often set them up for a bigger role in future projects. Think the way that Julia Louis-Dreyfus’ first appearance as Contessa Val in The Falcon and the Winter Soldier was kept a secret beforehand. Page could similarly be dropping by SI as a character who’ll go on to make a huge impact on the franchise and whose debut in the series is supposed to blow fans’ minds.

As for who, if this is really the case, he could be playing, the sky’s the limit. Page would be perfect for some kind of superhero role, of course, so take your pick from any of the members of the Avengers from the comics who’ve yet to make it to the screen. On the other hand, Marvel could be flipping the script and have hired him to play a villainous or more ambiguous role. The Gray Man proved that Page enjoys playing against type sometimes.

We also have to wonder: was this a mistake at all? What if Marvel deliberately put him in the press release only to deny it later to feed into the paranoid, “who’s really them and who’s not?” themes of the storyline? If so, we applaud their ingenuity. Otherwise, it’s a hilarious coincidence that the show about shapeshifting aliens infiltrating the planet happened to have a secret invader in its cast-list.

Secret Invasion will arrive on Disney Plus, as one of the first entries in Phase Five, sometime in spring 2023.