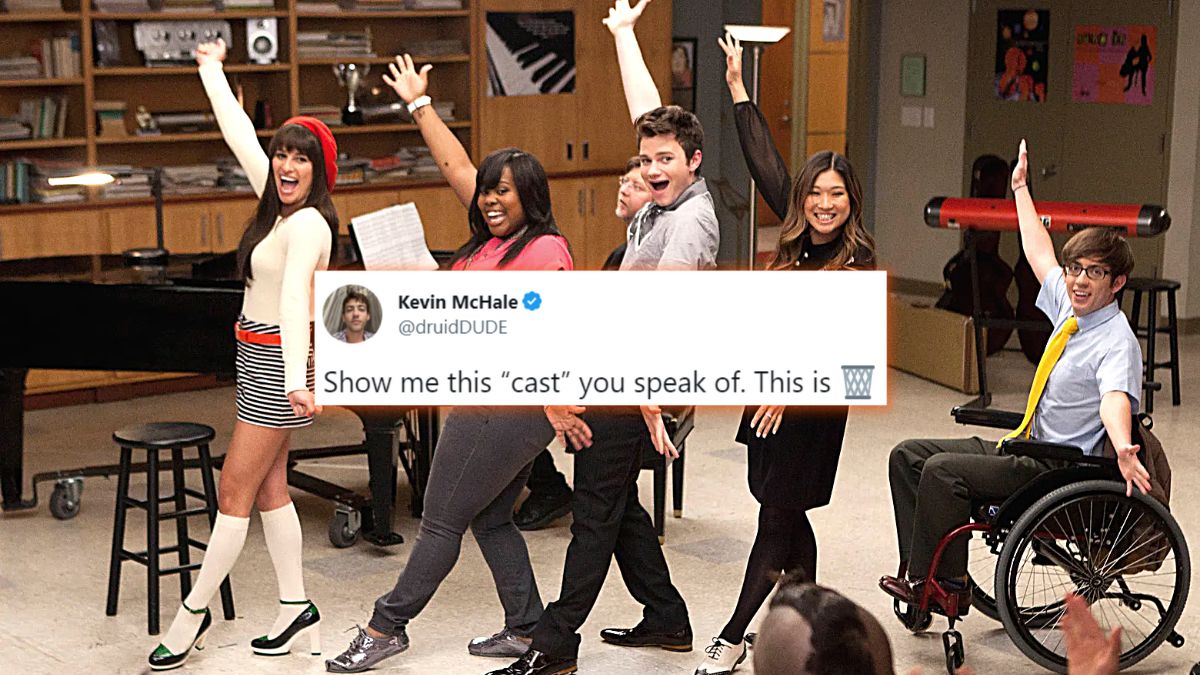 The sensationalist Discovery Plus/Investigation Discovery documentary The Price of Glee premiered Monday, Jan. 16. It contained some pretty jarring accusations and fed conspiracies which have surrounded the worldwide phenomenon for years.

The Price of Glee includes testimony from everyone ranging from journalists to relatives of the cast, and including crew members, and roommates, but none of the cast themselves. Although people who worked closely with the main stars of the Fox show sat down for interviews with the makers of the three-part so-called docu-series, the actors and actresses whose stories were being commented on purposefully chose to keep their distance.

On twitter, reacting to a Deadline article which claimed The Price of Glee would have access to “key cast members” of Glee, Kevin McHale, aka Artie Abrams, called the program “trash.”

On the same note, Chord Overstreet, who played Sam Evans, didn’t hold back, calling it “bullsh-t” on an Elvis Duran appearance last November. On the Everything Iconic with Danny Pellegrino podcast, Becca Tobin, Glee‘s Kitty Wilde, said people (presumably the Price of Glee makers) were “trying desperately” to get a member of the cast to join in, but just like Overstreet explained when he spoke about it, the actress said that the cast still see each other as family, and regardless of internal issues they might share, they would never publicly speak on their co-stars in this kind of format.

McHale and on-screen flame Jenna Hushkowitz created a new podcast — aptly called And That’s What You REALLY Missed — about the behind-the-scenes of Glee, in what they said was an attempt to take control of the narrative that has been created around the show. To Buzzfeed, Huskowitz said:

In their podcast series the two best friends — who Glee brought together all the way back in 2008 when they were cast as Artie and Tina — are adamant that, despite the tragedies that have shadowed it, the show was ultimately a very intimate, special, and positive experience for those involved, particularly the original cast members.

In a recent interview, Amber Riley — aka Mercedes Jones — doubles down on this sentiment, by choosing to highlight her friends’ work instead of the gossip. “What we did was amazing, and there were just as many amazing times than the five tragic things that happened on that show,” Riley told David Yontef.

The deaths of Glee cast members Cory Monteith, Naya Rivera, and Mark Salling are at the center of The Price of Glee as well as other tragedies like Melissa Benoist‘s abuse at the hands of Glee co-star and ex-husband Blake Jenner. Monteith’s friend, publicist, and roommate detail his struggle with addiction and his decision to tell the public after the show’s second season, while Naya Rivera’s father recalls the last conversation he had with his daughter, and claims Naya “hated” Lea Michele, despite her stating the opposite in her 2016 memoir.

The documentary also attempts to make the macabre connection between the deaths of the Glee cast members and five crew workers who died while making the show. The director of photography for Glee‘s first three seasons, Christopher Baffa, creepily states, “To lose so many people, so quickly, you see a pattern forming there that to me is still unbelievable. Was that Glee or just the industry? I don’t know.”

Fans looking to learn more about how the cast dealt with issues such as overnight fame, Cory Monteith and Naya Rivera’s untimely death, or Chris Colfer being outed as gay, can hear it from the people actually involved by listening to McHale and Hushkowitz’s podcast, available on all the usual platforms.