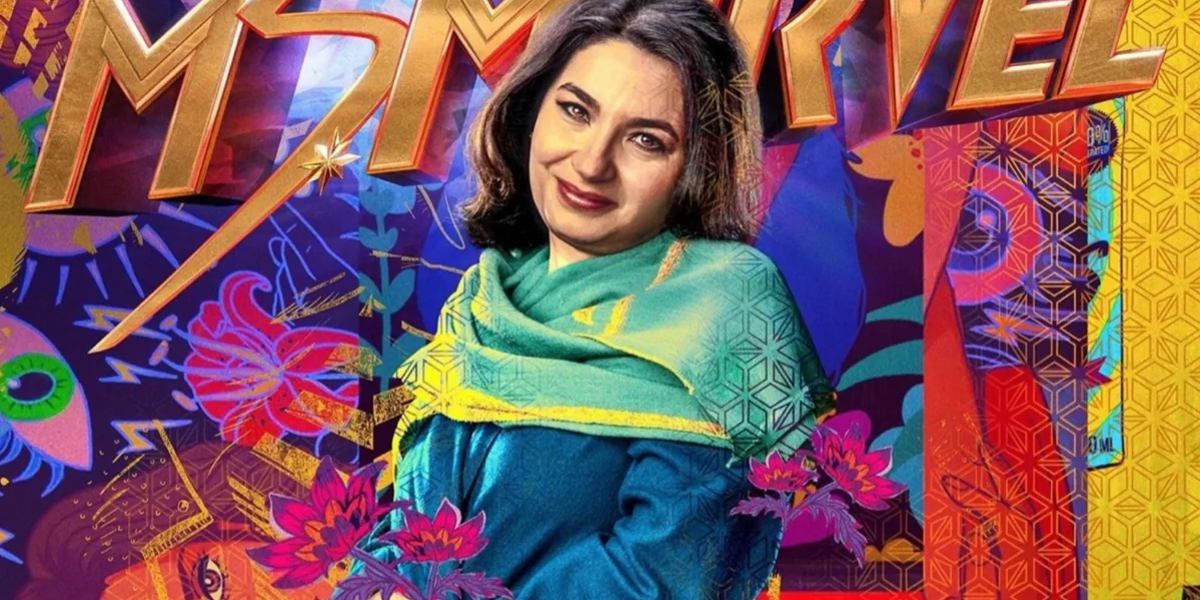 In Disney Plus’ new Ms. Marvel, a Muslim immigrant family residing in Jersey City is shocked to discovering the dual life that their urban and cool Marvel fan daughter is living. Kamala Khan (Iman Vellani) lives under rigid familial customs and a culture that raises eyebrows at anything remotely connected to American way.

Kamala has created an Americanized version of herself that somehow must abide by the traditions and conventions of her roots, which prohibit socialization outside the familial and educational space.

A barrier between fantasy and reality is created. However, it is short-lived when a bracelet sent by Kamala’s grandmother unlocks her magical, superhuman powers, not unlike her Marvel heroes. The bracelet becomes the tangible tool that makes it possible to actualize the impossible, allowing her to get beyond her famous quote, “And let’s be honest, it’s not really the brown girls from Jersey City who save the world.”

The show has been regarded as one of the best shows on Disney Plus and in the MCU, due to its unprecedented degree of relatability amongst the audience. Kamala is not surrounded by superheroes and supervillains (well, not yet). Her key goal seems to be escaping and saving herself from the unpleasant idiosyncrasies of her life. After all, who can serve as better villains than gossipy aunties wagging tongues about a woman choosing to “gallivant through Europe to discover herself”?

However, it is Kamala’s family that needs a special mention in this laudable take on diversifying the Marvel superhero trope. Her father Yusuf Khan, brother Aamir, and mother Muneeba have significant roles to play in opening the gates for Kamala to embrace her fantasy — especially Muneeba, as the introducer of the bracelet. Here are a few scenes, content, and speculations that might help form an opinion about Muneeba Khan’s prior knowledge of the bracelet’s magical abilities.

Who is Muneeba Khan?

Both comics and the show justify Muneeba (Zenobia Shroff) as a responsible and dutiful mother to Kamala, determined to keep her daughter protected from what she perceived as “trouble.” An advocate of Southeast Asian culture would immediately glorify her as a quintessential Pakistani mother trapped in a whirlpool of efforts to stay true to her ethnic roots and instill the same in her children. The comic portrayed Muneeba as a dedicated wife to Yusuf and a loving mother to her two children. The show, on the other hand, focused on highlighting her sporadic expressions of tough love towards Kamala.

Overall, Muneeba throws light on the perspective of a female immigrant residing in a country where activities like drinking, partying, and wearing tight Captain America outfits for AvengerCon is deemed haram. To anyone from this background, she is a relatable representation of a mother and a wife whose primary job is to impart to her children the “pristine” values of her roots. In the family, she clearly possesses an upper hand in making primary decisions related to her children’s whereabouts, even to the extent of refusing to let them dress like their favorite Marvel superhero or replacing it with her chosen one (remember the Hulk scene from Episode 1?).

Muneeba’s obeisance to her ethno-religious roots complements and somewhat justifies Kamala’s escape into the fantasy world of superheroes. Kamala’s other life is indisputably and intrinsically American, thereby allowing her to carve out a space of which she is the sole creator and essence.

Her only fantastical companion in this endeavor is her best friend Bruno (Matt Lintz). The chemistry of both characters has already established immensely memorable moments that are totally worth rooting for. The line between their fantasy and reality is blurred when they discover the power of the bracelet given by Kamala’s grandmother.

Was there any prior knowledge about the magical bangle?

Muneeba’s knowledge about Kamala’s identity has been covered in the comic but has yet to take a definite shape in the show. In the comic, Muneeba, on discovering the heroic pursuits of her daughter, feigned ignorance about it. She connected Kamala’s late-night returns from her endeavors with the extensive news coverage of Ms. Marvel. Kamala’s eventual confession about her identity made Muneeba reveal the possession of this secret knowledge. This was followed by words of encouragement and embraces, an expression and exhibition of support from a mother who is anything but chagrined at her daughter’s efforts at helping people.

The origin of Kamala’s powers underlines a marked difference between the show and the comic. It’s a major plot shift and Muneeba’s approach to her daughter’s obsession with fantasy occupies a crucial place in this shift. In the comic version, Kamala’s deeply concealed powers are triggered the mutagenic Terrigen mist, released by the Black Bolt of the Inhumans. The show places the source of power in a bangle, one of the many accessories that Kamala receives from her maternal side and which is supposed to be passed down to the youngest, living descendant.

Here, the show has done a meticulous job in integrating Pakistani customary practice (of handing down accessories to the living member of the generation) into the superhero-origin trope. As well, Muneeba is a member of the same generation whose instinctive dislike of the idea of Kamala possessing the accessory propelled her to snatch it away while uttering, “That is junk.” This immediately enhanced suspicions regarding the significance of the bangle amongst the audience. Does Kamala’s mother’s aversion towards her obsessions emanate from a cause that is still unknown to the audience?

The possibility of Muneeba’s prior knowledge about the bangle’s secret can be connected to her use of the word “fantasy,” possessing a sinister undertone and providing a glimpse into Kamala’s familial past that is shrouded in mystery. This theory is substantiated by her comment made in Episode 1, “I come from a long line of fantasizing, unrealistic daydreamers.” Kamala’s discretion at the end of episode 1 was met with a string of disillusioning remarks, including, “I’ve seen what happens when people get obsessed with their fantasies.” What is Muneeba hinting at? Is this in any way related to her knowledge of the Bangle’s supernatural capabilities?

While this is just speculation at this juncture that can be converted into a full-fledged theory, this seems like a solid point whose credibility is reinforced when the crumbs of Kamala’s maternal family’s history were doled out in Episode 2. This comprises the fascinating tale of her grandmother following a trail of stars to her father amidst the bloody riots of the partition, resembling the power of the bangle, whose purple aura manifests in solid hard star-like platforms in the air.

Another mysterious significance relates to the collective reticence about great-grandmother Aisha, whose only description till now is her action of bringing shame to the family. In this manner, the show has combined the history (partition) and customs of a different ethnic tradition to tailor a superhuman story like none before. Amidst the burgeoning familial angle to the story, what is Kamala’s fate? Would she receive any support from her mother or naani (maternal grandma) in dealing with her newly found identity or would the show steer in the direction of a dual life story quintessential of MCU plotlines? Let’s ponder over it till next week.