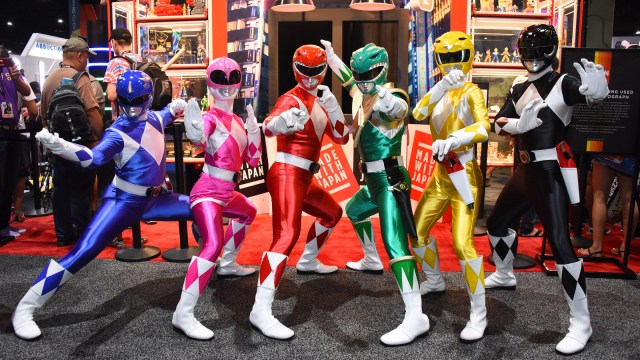 Can you believe it, Ranger Nation — the Power Rangers franchise turns 30 years old next year. There have been so many color-coordinated heroes over the years, but for its big birthday bash, many of the OG team of teenagers with attitude are returning to the fold to mark the milestone occasion. It’s been confirmed that an episode of Power Rangers: Cosmic Fury — the rebooted third season of Dino Fury — will feature a range of cast members from the original Mighty Morphin series, which ran from 1993-1995.

Details on the 30th anniversary special, including its exact release date, are currently thin on the ground, but clearly it will see the Cosmic Fury team join forces with the legacy characters to save the galaxy once again. Following a partial announcement earlier this month, the full lineup of returning Rangers has now been revealed — and it’s a truly morphenomenal roster of former favorites.

Here’s every familiar face we can expect to see in the reunion special.

David Yost, aka Billy Cranston the original Blue Ranger, was the longest-serving member of the Mighty Morphin team, being the only one to hold on to their place in the group throughout its entire three-season run. He even stuck around as an unmorphed ally in the follow-up series Zeo. His involvement in the 30th was previously revealed, along with…

Yes, the other member of the very first Mighty Morphin roster to return for this special occasion is Walter Emmanuel Jones, alias Zack Taylor, the Black Ranger. Jones originally left MMPR during season two, alongside co-stars Austin St. John (Jason) and Thuy Trang (Trini Kwan). His position on the squad was, in fact, taken up by…

Johnny Yong Bosch’s Adam Park is a bonafide Power Rangers icon, having inherited the Mighty Morphin Black mantle from Zack before serving as the Green Ranger in both Zeo and Turbo, even appearing in both the MMPR and Turbo movies. He previously returned for the franchise’s 15th anniversary during Operation Overdrive.

Steve Cardenas’ Rocky is another of the longest-serving Rangers. Starting out as the second Red Ranger on MMPR, he’s most remembered as Zeo‘s Blue Ranger. Like Bosh, he also appeared in both of the 1990s movies and only just reprised his role for the 25th anniversary special, “Dimensions in Danger,” which came as part of Super Ninja Steel.

Catherine Sutherland’s Kat Hillard, the Aussie second Pink Ranger, likewise appeared in “Dimensions in Danger.” She previously served on the MMPR, Zeo, and Turbo teams. The official comics have made it clear that Kat is now married to Ranger legend Tommy Oliver, so hopefully we’ll get a reference to that and what Tommy’s up to these days in the special.

Last but not least, Karan Ashley is also back as Aisha Campbell, the second MMPR Yellow Ranger who, unlike her teammates, was replaced for Zeo — although she’s immortalized as part of PR history in Mighty Morphin Power Rangers: The Movie. This is her first appearance in the franchise, then, since 1995. Welcome back, Karan!

As Power Rangers fans will know, Thuy Trang sadly died back in 2001, but the Power Rangers 30th anniversary is finding a way to honor Trini’s legacy as the original Yellow Ranger by introducing a brand-new character. Charlie Kersh is joining the franchise as the currently unnamed daughter of Trini. Will she have followed in her mother’s footsteps and become a Ranger? We’ll have to find out…