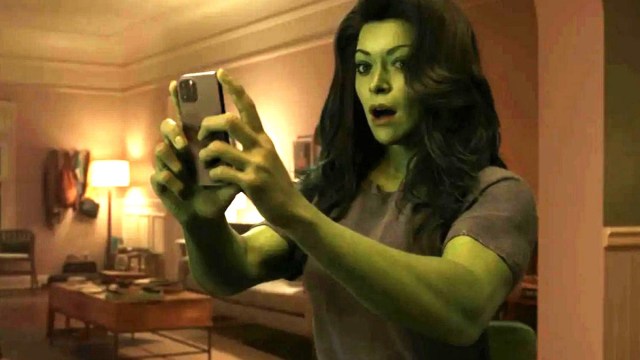 Marvel Studios have released a new featurette for the MCU’s newest Disney Plus series, She-Hulk: Attorney at Law, and fans think that they have spotted a reference to the original Ghost Rider.

In the new clip, you can see a poster of a man who looks as if he were surrounded by flames, and he clearly has the last name, “Blaze.”As for the first name, fans are speculating that it says ‘“Johnny,” and if that were to be the case, it would be a direct reference to the original Ghost Rider, Johnny Blaze. Blaze first appeared in Marvel Spotlight #5 by Gary Friedrick and Mike Ploog in 1972. He was popularized by Nicolas Cage’s portrayal of the character in the movie Ghost Rider and its sequel.

Some fans are convinced that it does say Johnny Blaze with one fan commenting, “A poster referencing Johnny Blaze, the original Ghost Rider was spotted in the #SheHulk featurette! He is coming.”

However, it seems as though Johnny would be one letter too long for that poster, and when not zoomed in, the image actually looks more like it says “Donny Blaze.” This could be a reference to Donny Cates’ run on Cosmic Ghost Rider, even though the main character in that book was Frank Castle. Cates is currently writing the latest run of Hulk for Marvel Comics, after his memorable run on Venom. Marvel is no stranger to throwing in references to writers or artists who have worked for them.

Based on the stage where the poster is located, the poster is probably for a magician or some kind of illusionist. This will probably be played for a gag, because Wong (Benedict Wong), the current Sorceror Supreme, is on the stage. Donny Cates definitely has the look of an illusionist, so maybe that’s why they thought of him.

Another possibility is that they took the name of two Ghost Riders and combined them for the poster as a subtle reference. One of the many characters who took up the Ghost Rider mantle was Danny Ketch, so perhaps the poster says “Danny Blaze.” Ketch first appeared in Ghost Rider Vol. 3 #1 by Howard Mackie and Javier Saltares in 1990.

If it were to be a reference to the character it would not be unwarranted or unwanted, as fans have been wanting Ghost Rider in the MCU for a while now. With Daredevil confirmed to appear in She-Hulk: Attorney at Law after the trailer was shown at San Diego Comic-Con, a reference to or an appearance from Ghost Rider would not be out of the question.

She-Hulk: Attorney at Law smashes onto Disney Plus on August 17, 2022.