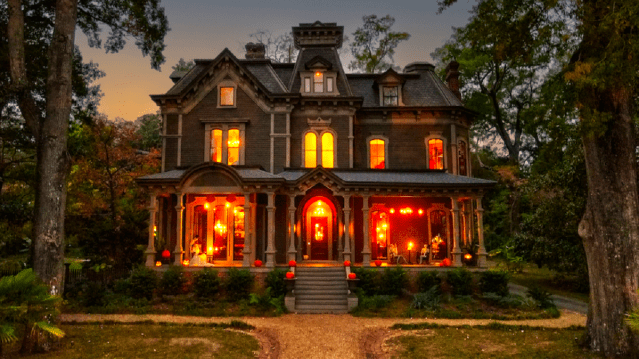 Just how much of a Stranger Things fan are you? Maybe you’re trick-or-treating as Eddie Munson tonight. Maybe you own a poster signed by the cast. You may even have a prop straight from the set. If you really want to show your devotion to Netflix’s flagship series, though, you’ll need money, and lots of it.

For the low, low price of only $1.5 million, you could be the proud owner of an important setting in the ST4 plot because the Creel House/Vecna House is on the market.

Locally known as the Claremont House, it was built in Rome, Georgia, in 1882. The elegant Victorian-style home had been a bed-and-breakfast until 2019. Soon thereafter, it sold for a reported $350,000. Since this past summer’s fourth season of Stranger Things, the house has taken on a new level of fame, drawing fans from near and far to get a selfie in front of the home. Now, the owners are looking to profit from the exposure.

The house was featured in both the first and second halves of ST4 as the setting for Vecna’s origin story. The fan-favorite villain was once a person named Henry Creel, played by Jamie Campbell Bower. Boasting telekinetic powers similar to that of the show’s resident superhero, Eleven, audiences were treated to flashbacks of Creel’s past as he transformed into the monster, Vecna. Through those scenes, the Creel House became a character in itself, mirroring Henry’s descent as the home degraded from a picturesque Southern mansion to a dilapidated and foreboding shell of its former glory.

The Claremont House wasn’t the only local landmark spotted in ST4. Rome’s Berry College served as the makeshift psychiatric hospital where Nancy and Robin visited Freddy Krueger himself, Robert Englund, who played Henry’s father, Victor Creel. In fact, the Northwest Georgia town has become a go-to location for several productions in recent years, including scenes filmed for Black Widow.