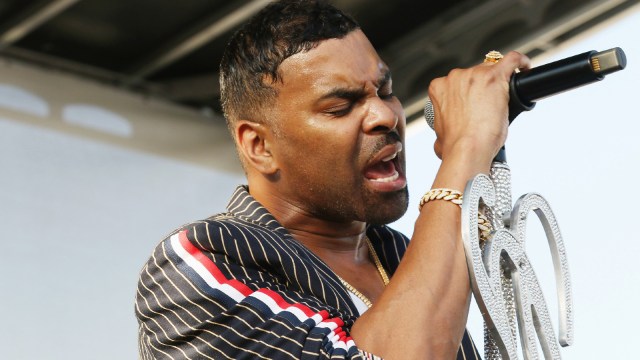 Criss Angel is currently filming a new The CW celebrity reality series, Magic With the Stars. However, the show almost got derailed before it even premiered, when 51-year-old R&B crooner Ginuwine suffered a terrifying moment in which he passed out on camera, moments after being submerged under water.

In footage obtained by The Daily Mail, the “Pony” singer could be seen completely submerged in a small glass cube filled with water, when he suddenly began banging on the glass for crew members to help him out. Initially, Ginuwine seemed to be OK, gasping for breath, but seconds later suddenly passed out as the crew members laid him down on the stage.

According to an undisclosed source, paramedics were called to the scene as the performer — real name Elgin Baylor Lumpkin — was carried away onstage unconscious though is understood to have later made a full recovery.

“It all happened so fast, it was like he got tapped out in a fight,” a source reveals.

Ginuwine had reportedly been trying to overcome his fear of being underwater with the stunt but had not been able to last more than 15 seconds before attempting it. Yet, despite the fact that he failed the stunt in rehearsals, he went through with it for the show anyway.

As long as there are no other speed bumps or near-death incidents, Magic With The Stars is set to premiere on Saturday, Oct. 22 on The CW.