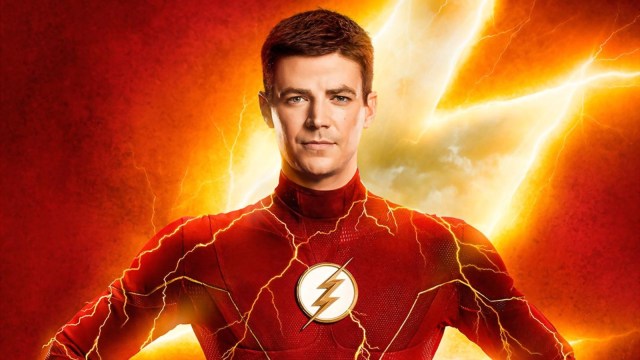 It’s the end of a very speedy era. Grant Gustin, the star of the The CW show The Flash, shared an Instagram story marking a sad milestone.

It was recently announced that the upcoming ninth season of the show would be its last, so Gustin snapped of selfie of himself suiting up in the famous lightning bolt costume.

“Last first time putting the suit on for a season…” the caption read. Check out a screenshot below:

Series executive producer and showrunner Eric Wallace shared the news last month. He said he was grateful for the chance to create the show.

“And now Barry Allen has reached the starting gate for his last race. So many amazing people have given their talents, time, and love to bring this wonderful show to life each week. So, as we get ready to honor the show’s incredible legacy with our exciting final chapter, I want to say thank you to our phenomenal cast, writers, producers, and crew over the years who helped make ‘The Flash’ such an unforgettable experience for audiences around the world.”

The Flash is one of the network’s longest running shows ever. It started airing in 2014, and it’s also the longest running DC show on the CW, outliving shows like Arrow and Legends of Tomorrow, which ran for eight and seven seasons, respectively.

The character is in a weird space as well, because there’s a very expensive movie coming out starring Ezra Miller, who’s also the subject of a deep diving Vanity Fair piece on their troubles with police and delusions of grandeur (Miller uses they/them pronouns).

There has been some talk about whether Gustin should step in and replace Miller, but right now that seems unlikely. It was also unlikely that Miller would get arrested after being accused of choking out a woman at a bar in Iceland, though, so who knows. Anything is possible, I guess.

The Flash airs on The CW and past episodes are available to watch on certain streaming services.