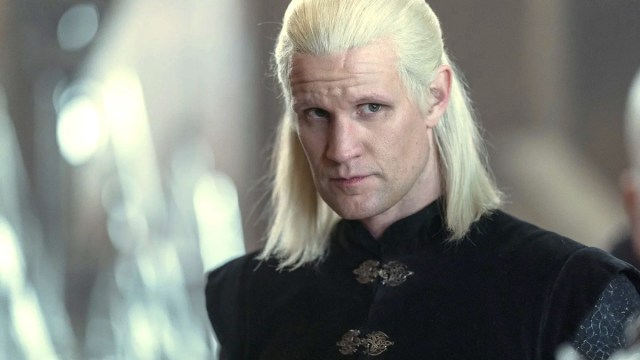 House of the Dragon ended in style with an exciting finale that set the stage for chaos. The Greens vs Blacks war has officially begun, with the first casualty Rhaenyra’s young son Lucerys. But all may not be well within the opposing camps: Alicent is bristling against her father’s manipulation of her life, and a scene midway through the episode shows that all’s not well in the Targaryen household.

Daemon is itching to wreak havoc across Westeros after the throne was stolen, with the new Queen Rhaenyra desperately trying not to rush headlong into war. But, if Rhaenyra is to be Queen, Daemon needs to stop overruling her and so she cleared the room to remind him who’s boss and tell him of the Song of Fire and Ice.

This led to a disturbing scene where Daemon grabs Rhaenyra by the throat, making viewers wonder whether her marrying her uncle wasn’t such a great idea, something showrunner Ryan Condal agrees with as he revealed to Variety.

“That’s such a loaded, multilayered question. A lot to unpack! Did Rhaenyra make the right choice in marrying her uncle? I don’t, in my opinion. That is an incredibly shocking scene and honestly, one of my favorite scenes of the finale that is beautifully performed by Emma and Matt.

I don’t think as the writer of this series that there is very much new information in that scene about Daemon. I think Daemon has very much, through the course of this season, shown you a lot of colors that would not lead one to be all that shocked in that moment. That primal danger is always lurking beneath the surface, and it just happened to come out in that moment.”

We began the season with Daemon having his own eye on the Iron Throne, but discovering his brother kept secrets from him seems to send him over the edge.

“It was made very obvious to him that his brother never really regarded him as the true heir of the throne. That infuriates him. It’s the worst hurt that he could experience to learn that Viserys kept [the prophecy] from him, that he so willingly shared with Rhaenyra. It just breaks Daemon in that moment, and that’s how he reacts.”

Daemon is likely to go over the edge when he reacts to Lucerys’ death, so expect season two to open with fireworks as Westeros is plunged into open war. This season has been a hit, so it’s likely HBO will increase the budget for what’s to come and show us some incredibly destructive dragon-on-dragon battles.

Sadly, there’s at least a two-year wait before that, as House of the Dragon isn’t expected to return until summer 2024. It’s going to be a painful wait for Game of Thrones fans until then.