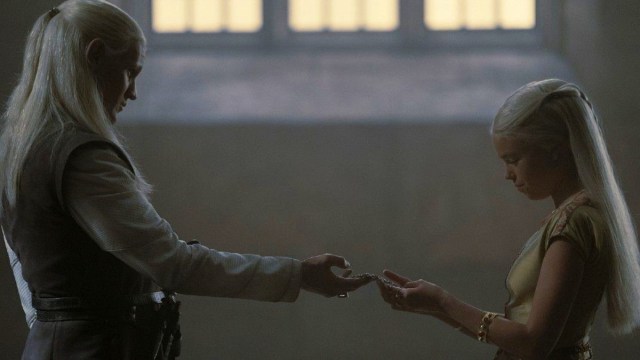 Major spoilers ahead for House of the Dragon

House of the Dragon has finally hit the screen heightening excitement and speculations regarding what the show has in store for the future and most importantly if it would be able to live up to the audiences’ expectations as well as the popularity of its sequel.

The show features the battle of the succession of the Targaryen family following the reign of Viserys Targaryen (Paddy Considine). With the death of his newborn son, the major question that remains is, who will be his successor? Would it be his brutal younger brother Daemon Targaryen (Matt Smith) or his daughter Rhaenyra (Milly Alcock)?

The first episode has depicted Viserys’ decision to appoint his only daughter as the crowned queen of the realm leaving a vast majority of his council members disappointed on the grounds of having a potential female ruler in the future, a vast anomaly in Westeros’ rules of succession.

The most distressed amongst all is her formidable contender for the throne, Daemon Targaryen. Depicted of his unadulterated and unapologetic brutality as the Commander of the City Watch, Viserys rejected his claim to the throne on grounds of his tactlessness and uncontrollable aggression.

However, amidst the intrigues, squabbles, and violence, an astute viewer would be quick to point out a rather intimate connection between the throne’s two competitors from the family, Rhaenyra and her uncle Daemon. Let’s delve into the details of the relationship between them.

In Martin’s Fire & Blood, just like in the series, both Rhaenyra and Daemon are related by blood, being the daughter and the younger brother of Viserys Targaryen, respectively.

In the book, they are also brother and sister-in-law by relationship as Rhaenyra was married to Laenor Velaryon and Daemon to Laena Velaryon.

However, not unlike the future queen Cersei Lannister, Rhaenyra also became the subject of an outrageous extra-marital affair following the discovery that her husband Laenor was gay. Her sons were also rumored to be fathered by her lover, Harwin Strong.

Following their respective husbands’ deaths, Daemon and Rhaenyra married each other. They had a 16-year age gap and Daemon was 39 years old at the time of marrying Rhaenyra. Expectedly, their marriage is not gleefully accepted in the beginning causing a rift between Daemon and Viserys. The union was later recognized and the couple went on to have two sons, Aegon and Viserys.

Their relationship in the series

The series does not get distracted from depicting the complexities of the relationship between the duo. Like in the book, both Rhaenyra and Daemon are potential claimants to the throne and its biggest contender.

The first episode of the series depicts a flirtatious interaction between the uncle and niece. When Rhaenyra went to meet her uncle in the throne room, she found him sitting on the throne much to the dismay of the Kingsguard.

The conversation took place in Valyrian where Daemon boasts in confidence about his potential to become the realm’s successor after which he gifts her a necklace made of Valyrian steel and puts it around her neck in what has been considered one of the most intimate and unsettling scenes of the show. Both Smith and Alcocks spoke on this subject with Popsugar where the latter commented on the very scene. She said,

“Matt’s incredible. He’s such a generous actor.” But I wanted to make sure with Rhaenyra that she wasn’t aware of what she was feeling and she wasn’t fully aware of what this attraction meant to her because she hadn’t experienced love or sex yet. So she didn’t know what was going on, but something was definitely going on, and she’s unaware. So I hope that me and Matt left quite an ambiguous scene.”

The duo occupies less screen time in the second episode which largely follows the confrontation between them. Rhaenyra accuses Daemon of stealing the dragon egg that was reserved for her unborn brother and asked him to attack her directly for being the obstacle to his goal to become the ruler to which the latter leaves without obeying.

It is unknown how their storyline would progress in the future but if the series proves to be an honest adaptation of the book, then we would definitely get to see the infamous Targaryen incestuous ceremony that has only been heard till now. One thing is certain, as unsettling as this sounds, this won’t come across as shocking for the fans who were cheering the romance between Jon and Daenerys in Game of Thrones.