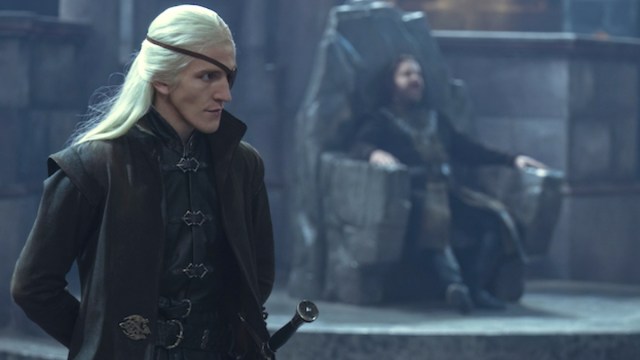 Spoilers ahead for House of the Dragon season 1, episode 10!

If the inaugural season of House of the Dragon was intended to set the stage for a Targaryen civil war, then it was one moment in the season finale that fully clinched what we know is going to be a long and bloody battle between the Greens and the Blacks.

After the coup staged by Alicent Hightower (Olivia Cook) and the elders at King’s Landing to install Aegon II Targaryen, King Visery’s first-born male child, as ruler of the Seven Kingdoms, Rhaenyra (Emma D’Arcy) quietly attempts to get some of the noble houses on her side. As such, she sends her second born child, Lucerys (Elliot Grihault), to Storm’s End in a bid to win over House Baratheon, only to find that Prince Aemond (Ewan Mitchell) has already beat them to it.

Naturally, the encounter between Lucerys and Aemond stirs up bad blood, dating back to the pair’s childhood — only a few episodes ago, if you can believe it — in which Lucerys accidentally took Aemond’s eye out of retribution for “stealing” the dragon Vhagar from Laena Velaryon’s daughters. Once again, Aemond demands an eye for an eye, but since no one is having it, he instead follows Lucerys and his young dragon Arrax to seemingly intimidate his nephew, but the dragons quickly take matters into their own hands. (Claws??)

Tragically, the chase ends with Vhagar essentially chomping Lucerys and Arrax in half, as the dragon’s sad, severed wing flutters down into the sea below. But while Aemond is probably not especially sad at the turn of events, he was most certainly not sent to murder the young prince — so his thought process in that moment, if any, was unclear.

Thankfully, showrunner Ryan Condal is on hand to help sort things out. In a conversation with The Hollywood Reporter following Sunday night’s explosive finale, Condal breaks down that pivotal scene that will set the stage for the rest of the series going forward.

Aemond is definitely not blameless in what happened to Luke. But Aemond was also a kid who was bullied and was made a mockery for part of his life for not having a dragon. Now he does, and he rides the biggest dragon in the world. I think he was showing his rival that he will not be intimidated and trifled with is probably more in play there than trying to become a kinslayer — that would be very un-calculated and stupid of Aemond to do at the outset when the pieces are moving about the board and loyalties are being set and figuring out who is going to make marriage pact to guarantee whose army … for Aemond to launch nukes right out of the gate and go for an all-out dragon war would be very foolish, but that’s exactly what he ends up doing because things get out of hand and out of control. It’s a complex scene. Aemond is not blameless, but he’s also not a psychopath without a logical line of thinking.

Even though “not a psychopath” seems like high praise in the Game of Thrones universe, as we all know, actions have consequences, and Aemond’s mistake is going to bring about untold bloodshed between the two sides of the family. But the good news for fans is that it should make for a pretty thrilling second season of the HBO series, anyway.