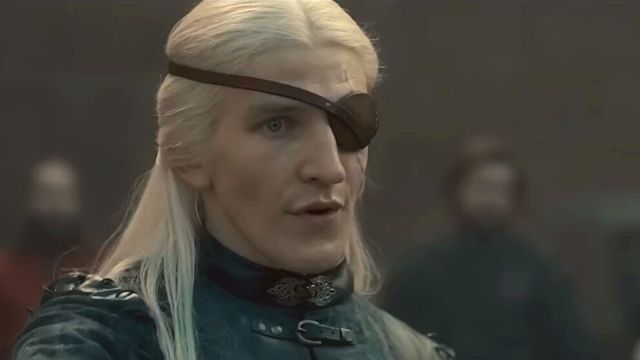 The final episode of House of the Dragon’s first season has landed on HBO Max. In addition to kicking off the Dance of the Dragons which was referenced in Game of Thrones, HBO’s prequel series saved a few gems for the finale. One of these payoffs in the last episode was that we finally got the answer to what was underneath Aemond’s eye patch. So let’s take a look at what exactly Prince Aemond Targaryen (Ewan Mitchell) put under his eye patch, and why he needed to put something there in the first place.

In case you have forgotten, Aemond needs to wear an eye patch because of his actions on Driftmark in episode seven of the season — “Driftmark”— after Lady Laena Velaryon’s funeral. Upon her death, the largest dragon in the realm — Vhagar — was unclaimed. Wasting no time, Aemond took it upon himself to hop onto the gigantic dragon’s back, claiming her as his own. But he was spotted by Laena’s daughters, Baela and Rhaena Targaryen.

After alerting Lucerys and Jacaerys Targaryen — the two sons of Princess Rhaenyra Targaryen (Emma D’Arcy) — they went down to the beach where Aemond was getting off Vhagar, ready to come back to the castle. As he was confronted by the group, and as he was receiving better training from Ser Criston Cole (Fabien Frankel), he easily bested the boys in combat. But Rhaenyra’s boys were crafty, and after a distraction Lucerys was able to stab him in the eye, saving the girls who he was also going to attack.

Alicent Hightower (Olivia Cooke) then demanded an eye for an eye after it was determined that Aemond would be blind. As he already hated the boys, it was no surprise that losing an eye spurred his hatred for them even further. Fast forward to the last episode and Lucerys (Elliot Grihault) is charged with delivering a message to Storm’s End to remind Lord Borros Baratheon (Roger Evans) of their oath to Rhaenyra as the heir to the Iron Throne. But waiting for Lucerys and his dragon Arrax were Aemond and Vhagar.

After Borros laughed in Lucerys’s face insulted, Aemond stoked the flames by ripping off his eye patch demanding Lucerys carve out his own eye as his mother wanted years prior. But underneath his eye patch, unbeknownst to viewers until this very moment, was a blue sapphire. What is the significance of the blue sapphire? It almost has no significance at all, as Aemond wanted to simply cover up his hollow scarred eye. It is not mentioned too often in the source material — George R. R. Martin’s Fire and Blood — but we do know that it was a blue sapphire. Although if you did care about the sapphire, you probably lost interest soon after as he killed Lucerys and his dragon while chasing him on Vhagar.

It is worth noting that if you pay attention to the opening titles, rather than just humming along to the theme like a madman, you would have noticed the same blue sapphire on one of the sigils. This is because while the Targaryen sigil is a dragon, each individual has a personal sigil as well. For example, King Aegon II Targaryen’s (Tom Glynn-Carney) sigil in the opening credits is a naked woman, while Queen Helaena Targaryen’s (Phia Saban) sigil is a spider.

There is also something to say about the symbolism of the blue eye, colored like the eye of a White Walker. In that moment with the warring factions, and specifically between Lucerys and Aemond, they both represent the Song of Ice and Fire. Lucerys represents the fire side, with Rhaenyra being the heir and the sole Targaryen who knows the prophecy and Aemond’s blue sapphire represents the ice side. Although this is most likely drawing at straws, and at his age, he might have just thought the blue sapphire looked cool.

House of the Dragon keeps differing from the source material, as some of Fire and Blood was written from a perspective of what may have happened, or told by people who were not there. It would be interesting if one of the ways the two diverge, is by getting some backstory in the second season regarding the blue sapphire. Although it is most likely that he just found it somewhere among the riches of King’s Landing, or it was part of the Hightower’s massive wealth, and he just slotted it in his eye hole.

Either way, we will find out if the story expands beyond Fire and Blood when the second season of House of the Dragon arrives, whenever that might be. As for now, you can stream House of the Dragon’s first season in its entirety on HBO Max.