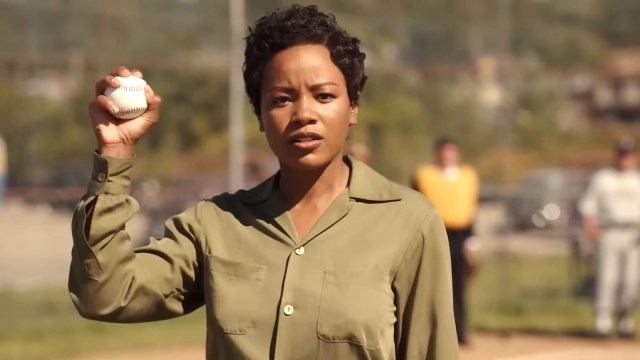 Amazon Prime Video’s A League of Their Own had a lot to live up to when it premiered on Aug. 12. Reboots don’t have the best reputations, but this remake of 1992’s Tom Hanks/Geena Davis classic has largely knocked it out of the park.

The series currently holds a 95 percent score on Rotten Tomatoes and is being praised for its tactful approach to themes that were largely left out of the original feature film. Namely, the African-American and LGBTQIA+ representation that drives a significant chunk of the storyline.

Due to the nature of the season finale’s cliffhanger, can viewers expect to see Carson (Abbi Jacobson), Max (Chanté Adams), and Greta (D’Arcy Carden) continue their storylines in a second season? Here’s what we know.

Will A League of Their Own be renewed for a second season?

Even though A League of Their Own hit a grand slam with both critics and audiences, Prime Video has not yet greenlit the show’s second season. Reboots are a tough sell, and Amazon is clearly keeping its cards close to its chest before making any announcements, likely waiting to see the overall public opinion before moving forward.

That being said, co-creator Will Graham has wasted no time getting to work on the next installment. “We’ve already started writing and bringing the story for season two,” he said at the show’s Television Critics Association panel, according to Elle. “Our hope is to shoot in like, mid-spring.”

This paragraph contains spoilers for A League of Their Own’s season one finale.

If or when the Rockford Peaches return for a season two, we’ll see them pick up the pieces of their championship loss. We also will see the fallout from Carson’s decision to go her own way, leaving both her husband and Greta in the dust, even after kissing the latter goodbye.

We Got This Covered will update you with more information as soon as it’s announced, so stay tuned. In the meantime, you can read our full review of A League of Their Own’s first season here.