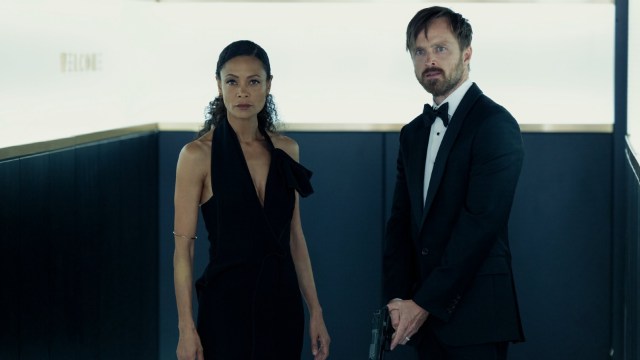 There are reasons to believe that Caleb (Aaron Paul) might actually be a host in Westworld. You never fully know who might be a host pretending to be a human in this series, and the guessing game is half the excitement. The technology is so advanced that the two are nearly indistinguishable. It makes for a great commentary on our machine-like existence, and it keeps viewers questioning what’s really going on. With season four time-jumping about seven years, everything we once knew about these characters and who they are now is turned on its head.

Caleb was introduced in season three as a construction worker who would take illegal work using the RICO app for extra money. He was unsatisfied with his life, but it all turned upside down when he saved the injured Dolores (Evan Rachel Wood), putting him in the crosshairs of the police who were after her for having escaped. She offered him the chance at exacting revenge on Rehoboam, the quantum computer program that predicted human outcomes, and he agreed to the mission. Caleb was very much the “everyman” character-turned-hero during this time, but has he changed into something else?

Season four picks up with Caleb living a normal life with a wife and daughter until Maeve (Thandiwe Newton) brings him back into the game, and she saves him and his family from a gunman. She tells Caleb that William (Ed Harris) sent killers after him and if he wants to protect his family he’ll need to come with her to stop him. Fans have speculated in a popular Reddit post that Maeve knows he’s a host now, and Caleb might not know it.

There’s a vast difference between his family life and the huge role he played in bringing down Rehoboam. He almost seems like a different person, a shell of who he once was. There’s a scene in the first episode of the season where he shows discontentedness about his life, not unlike how Dolores felt in season one when she started realizing her life was fabricated. There’s speculation that his wife and daughter could also be hosts, keeping him in a loop.

In season four, episode three, “Années Folles,” this theory might have been debunked–but maybe not for long. Caleb and Maeve enter the new Westworld park, a take on the 1920s era, and get caught in the middle of a gunfight. They pretend to be dead hosts and hitch a ride to the Mesa Hub where hosts undergo behavioral training. When they arrive and investigate, another gunfight happens and Maeve reminds Caleb that their weapons only harm other hosts and his gun won’t work on humans. She sustains damage, but he does not.

The pair travel to a lower level and find a testing site where drone hosts experiment with a black liquid and study the veracity of the parasites that are then mixed to speed up infection rates. This substance attracts flies, and as Caleb and Maeve come to a glass case filled with them, they start gathering toward him. She tells him that they only react to humans, which is another point against Caleb being a host. Flies have been used as micro-hosts that enter the body through the eyes and access the brain. The flies are under the control of Charlotte Hale (Tessa Thompson), and she’s been using them to manipulate powerful members of society. Evidently, she’s got her eyes set on Caleb.

Later, Caleb goes to a holding area where he sees his daughter — or so he believes — playing a game with building blocks and a gun. He tries desperately to get inside, banging against the glass wall and door, and finally, Maeve is able to unlock it. He rushes to her, but the little girl grabs on tight to him and tells him, “She wants you to stay.” She opens her mouth so wide that her face splits into sections and reveals a robotic skeleton, releasing flies that cover and enter the screaming Caleb. If he wasn’t a host before, he just might be now.