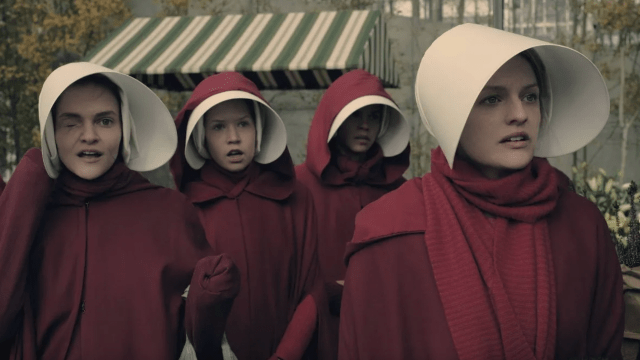 Over the course of five seasons, Hulu’s ever-popular series, The Handmaid’s Tale, has left fans speechless, enraged, weeping, and begging for more with each passing year. Created by Bruce Miller and based on the novel by Margaret Atwood, the critically acclaimed series has scored eight Primetime Emmy Awards and several Golden Globe Awards for its incredible cast performances and jaw-dropping premise.

Led by The Invisible Man’s Elisabeth Moss, the show centers around the aftermath of a dystopian shift, where a totalitarian government has enforced unfathomable laws against women, with many expected to serve as natal slaves to their husbands (or complete strangers) and children. As a result, the women are commonly referred to as “Handmaids” and are obligated to obey the power-hungry elite, wear long, traditional dresses, and adhere to all other rules sanctioned by the government.

While the show has undoubtedly been a sure-fire hit for the last five years, fans are all beginning to ask the same glaring question: When will the series actually reach its conclusion?

Will season 5 be the final season of The Handmaid’s Tale?

Much to the delight of fans everywhere, season five will not mark the end of the dystopian series. As per Variety, The Handmaid’s Tale is set to conclude with its sixth season, which has already been confirmed. However, with the show’s fifth season airing its finale today, writing, planning, and production for season six has yet to be officially announced. Still, the show’s devoted fanbase can sleep easy knowing that season five is not the last.

Star Max Minghella says he wishes he could perform in the show for another 20 years. While that task would prove to be highly unlikely, it’s the perfect example of how successful and sought after a show can be when it incorporates a star-studded cast, genius storytelling, and an array of relatable characters.

Ahead of the show’s upcoming sixth season, be sure to catch all seasons of The Handmaid’s Tale on Hulu now.