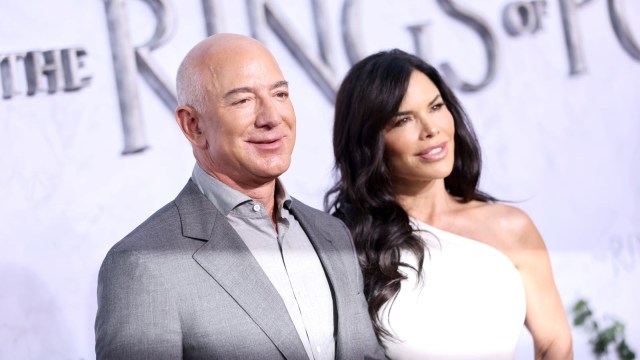 Amazon and its executive chairman Jeff Bezos often make the headlines for less than happy reasons, with the company routinely criticized for their treatment of warehouse and delivery staff, efforts to squash collective bargaining, and wiping out brick-and-mortar competitors. But even those opposed to Amazon’s wider activities often seem able to look past that to enjoy Amazon Prime exclusive shows like The Boys, The Expanse, and Good Omens.

But even these hits pale in comparison to the juggernaut that is The Lord of the Rings: The Rings of Power, which premieres at 9 pm ET tomorrow on the service. The reviews are positive and expectations are high, but those trying to forget that Bezos is bankrolling the show may find the revelation he was involved in the story a bitter pill to swallow.

Bezos’ involvement in the story was confirmed in Deadline, and confirmation came from the man himself while making a surprise appearance at last night’s London premiere. While there he praised The Rings of Power showrunners Patrick McKay and J.D. Payne, but also revealed he’d been giving them unsolicited notes on the scripts:

“Every showrunners’ dream is to get notes on early scripts and cuts from the Executive Chairman, they just love that. I want to thank you both for listening whenever it helped but mostly I need to thank you for ignoring me at exactly the right times.”

It’s easy to write this off as a joke, but any note from Bezos inevitably comes with a lot of weight attached whether it’s a good idea or not. After all, Bezos is one of the richest men in the world and retains control of Amazon, so if you’re making the most expensive show of all time on his dime it’s best to keep him happy. Then again, if you’re spending a cool billion on a TV show maybe you do deserve some editorial control over it?

While we’ll probably never know what Bezos’ alterations to The Rings of Power were, it’s unnerving that a businessman with no writing experience has now had a hand in Tolkien’s world. Whatever the case, if there’s a suspiciously positive portrayal of an extraordinarily wealthy and very bald elf in the first few episodes, we know who to thank…

The Lord of the Rings: The Rings of Power premieres on Amazon Prime tomorrow at 9 pm ET.