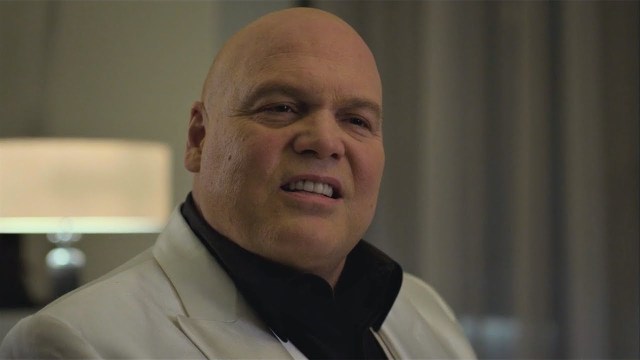 Vincent D’Onofrio is making a big return to the Marvel Cinematic Universe following a few dry years after Daredevil was cancelled by Netflix, and fans think his as Kingpin return in Hawkeye may have a lot more going on.

Introduced in the first season of Daredevil, Kingpin has been an absolute fan favorite villain and continues to dominate fan discussions over best villains in the MCU. Fierce, imposing, and suitably maniacal, he’s gotten some splendid stories over three seasons on Netflix.

He returned after a lot of build-up and speculation in the final two episodes of Hawkeye on Disney Plus, in a lovely Hawaiian shirt and white suit pants. But it’s not his fashion fans are talking about today, it’s whether or not he has taken the super soldier serum.

Redditor /u/ProwlerH18 believes that the return of the menacing crime boss, larger than life as he ever was before, is because he’s taken the same serum that made Captain America.

Kingpin is undoubtedly an absolute beast of a man and is often shown in comic books to be a similar size to the likes of Venom or Rhino, and this theory does give a good reason as to why. He survived a lot just in the finale alone, with gunshots and explosions barely fazing the absolute unit.

Falcon and the Winter Soldier stresses that the serum had been remade and recirculated, and if anyone had the connections and money to get it, it’d be Wilson Fisk. Fans are having a Kingpin renaissance after the announcement of Daredevil: Born Again, with others thinking he’ll show up in Secret Invasion.

Kingpin can be seen in all his glory on Disney Plus’s Hawkeye and Daredevil.