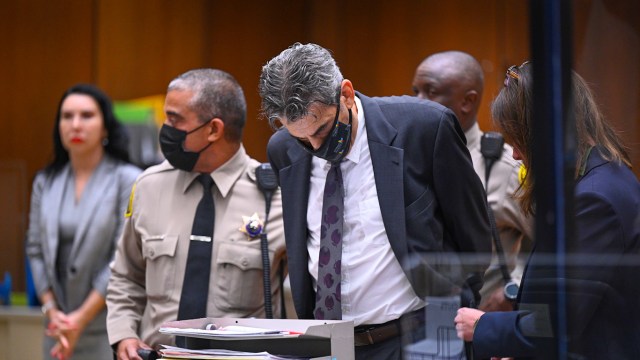 A former writer for Californication and Scrubs, who pled not guilty to 18 counts of criminal sexual misconduct, has been accused of rape by two more women in a civil suit.

Eric Weinberg, who was also an executive producer on Scrubs, is currently in custody after his $5 million bond was revoked, according to Deadline. The civil suits were filed late Monday in Los Angeles Superior Court.

One of the plaintiffs said Weinberg sexually assaulted her in 2019 in his L.A. home.

Weinberg reportedly “offered to help C.D. start a modeling career and booked her for a photo shoot, but once he had her alone on his property” he assaulted her. Micha Star Liberty, the lawyer for the two women, said it’s imperative that Weinberg be punished for his alleged acts.

“Eric Weinberg is a calculated, serial predator who targeted these women, and caused them immense trauma, mental anguish and physical harm. Weinberg must be held accountable to these women for his horrifying actions.”

Liberty said that she teamed up with the Gibbs Law Group to potentially bring more civil suits from more victims. Weinberg was originally arrested in July for alleged rapes from 2012 to 2019. Judge Victoria B. Wilson, who’s presiding over the case, said Weinberg “has engaged in a pattern of violence for at least six years.”

She also said he was a “serial rapist” and called him “brazen and predatory.” Deputy D.A. May Martinez, at a hearing in October, said Weinberg was a “danger to society” and “all females.”