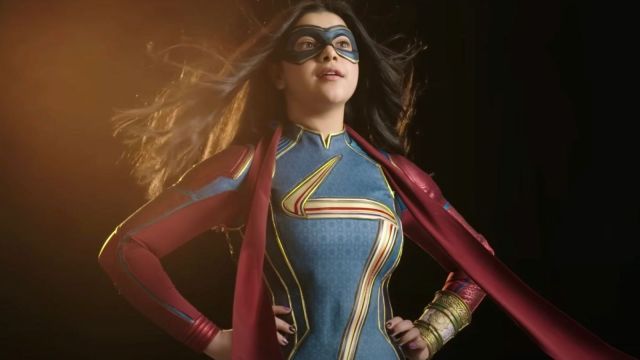 Ms. Marvel actress Iman Vellani is unbothered by the trolls that review-bomb the show. Vellani stars as Kamala Khan, the 16-year-old Muslim-American superhero who’s finding her place in the world, and it’s caused some people to take issue with it.

Vellani spoke to NME about being aware of the hate the series receives and not concerning herself with it.

“I’m not on social media. I hear things that my mother tells me though. It’s honestly quite laughable and I think change is scary for a lot of people. And having a show that surrounds a 16-year-old girl who’s Pakistani and Muslim and a superhero is scary for a lot of people. I think this is just gonna rip the Band Aid off and hopefully people will fall in love with her. This show is for Marvel fans. If you’re a real Marvel fan, if any of those review bombers consider themselves a Marvel fan, then this show’s for them too. We wanted Ms. Marvel to be a love letter to Marvel fans. So yeah, I don’t care about them!”

Ms. Marvel hasn’t shied away from exploring Kamala’s roots. It’s shown her struggle to uphold cultural expectations, like not being able to wear a Captain Marvel cosplay costume because it’s too revealing, and her friend Nakia’s (Yasmeen Fletcher) impassioned speech about why she wears her hijab. The show doesn’t hold back.

Episodes five and six take place in Pakistan, and delve heavily into the India-Pakistan Partition that devastated many families, including Kamala’s. She reunites with her cousins and her grandmother as she learns about the country and meets a vigilante group called the Red Daggers. The viewers are treated to scenes of her great-grandmother Aisha (Mehwish Hayat) in 1947, and learn the familial significance of the bangle and the devastation caused by British imperialism.

This isn’t the first time trolls have review-bombed a project simply because it dared to variate from the status quo. Eternals, which featured a diverse cast playing immortal beings who have protected the earth for thousands of years, received a lot of hate leading up to the premiere, yet still managed to make an impressive $402.1 million at the box office.

These stories that offer something new also manage to benefit those who don’t see themselves represented. A study showed that because of the Eternals’ deaf speedster Makkari (Lauren Ridloff), there was a 250% increase in the number of people looking to learn sign language. Similarly, Kamala Khan as the MCU’s first Muslim superhero is breaking boundaries and inspiring many people who relate to her life.

Ms. Marvel is available to stream on Disney Plus.