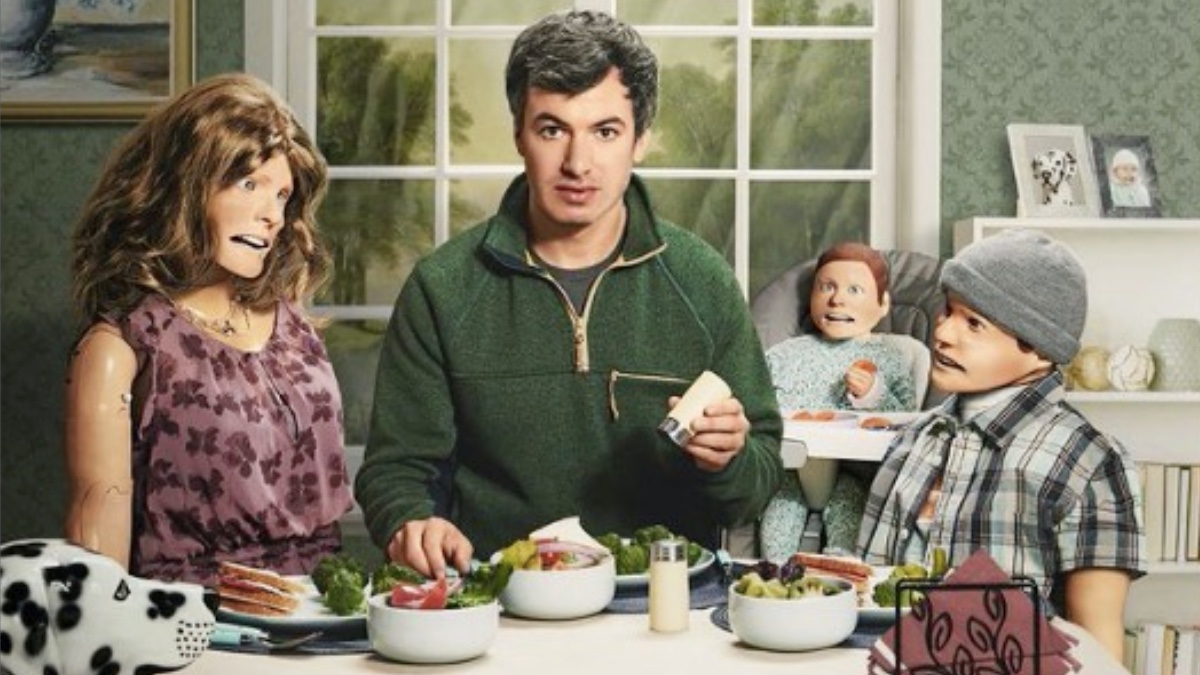 Nathan Fielder shared the poster and release date for his mysterious, deranged-looking (as if he would have it any other way) HBO Max series, The Rehearsal on Friday.

Though we still don’t know know further details about the upcoming half hour-long series, which will apparently give people a chance to rehearse moments in their own lives “in a world where nothing seems to ever work out as you had hoped,” it is indeed coming soon, as Fielder previously teased — with a July 15 premiere date.

“Why leave life to chance?” asks the poster, which features Fielder sitting at a dinner table surrounded by mildly terrifying looking mannequins. The window behind him looks out to a stage backdrop with film lights pointing in, in what would otherwise be a fairly normal looking dining room — save for the creepy mannequins, of course.

Earlier this week, Fielder offered a first look at the upcoming series, which like the poster, seems to have a very Truman Show feel to it. In the 30-second clip, the actor and comedian watches what appears to be a mother sitting next to a baby’s crib from closed circuit cameras on a huge monitor, while slowly pacing and looking pensive.

It’s still unclear whether the new series will be scripted or will involve real people, similar to his Comedy Central series Nathan for You, which ran for four seasons from 2013 to 2017, and HBO’s How To with John Wilson, which he also executive produces.

Assuming the new series is indeed documentary-style, it shouldn’t be a huge stretch from Fielder’s previous work. In Nathan For You, he often went through elaborate, oftentimes cringe-including schemes to achieve the end result — which was ostensibly to help struggling businesses.

As the series went on, however, the stakes became higher as he attempted to help everyday people overcome obstacles in their lives. For example, one season 3 episode featured the 39-year-old attempting to turn an unremarkable man into a humanitarian hero by impersonating him walking a tightrope between two buildings. In the two-hour series finale, Fielder went on a journey to reunite a Bill Gates impersonator from a previous episode with his long-lost love.

In addition to The Rehearsal and How To with John Wilson, which was picked up for a third season earlier this year, Fielder also created and stars in the upcoming Showtime series The Curse with filmmaker Benny Safdie. The premise for the scripted series, which also stars Emma Stone, explores how “an alleged curse disturbs the relationship of a newly married couple as they try to conceive a child while co-starring on their problematic new HGTV show.”