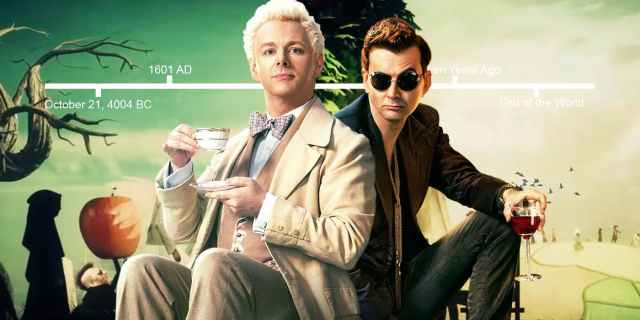 While Neil Gaiman fans are gearing up for Netflix’s The Sandman, which finally debuts next month, a second season of another streaming hit based on one of the author’s best-selling works is likewise on its way. Good Omens became an internet sensation when it dropped back in 2019, with viewers lapping up the apocalyptic comedy, as adapted by Gaiman himself from the novel he penned with Terry Pratchett.

In the face of public demand, a second season went before cameras earlier this year, with Michael Sheen and David Tennant returning to reprise their beloved roles as Aziraphale the angel and Crowley the demon. For anyone hoping that we’ll be getting a first look at the new run at this weekend’s Comic-Con, however, Gaiman had some bad news. When asked by a fan about this possibility, the EP admitted we have “a long, long wait” until a trailer gets here.

This then got folks worrying that Good Omens season two had hit a snag, with one even accusing the show of being cancelled. Gaiman soon clarified that people have nothing to fear, though, explaining that there’s nothing unusual going on here. “We’re still editing Good Omens Season 2,” he replied. “Trailers don’t happen until ALL the show has been edited, enough CGI has been done so that the Trailer isn’t shots against green screen, & and the network knows when the show is coming out.”

Sheen and Tennant will be joined by many of the supporting cast from the first season, including Michael McKean, Miranda Richardson, Reece Shearsmith, and Nina Sosanya, although some will take on different roles. Newcomers include Andi Osho, Tim Downie, Liz Carr, Quelin Sepulveda, and Shelley Conn. And, don’t worry, Jon Hamm is back as Gabriel. The original storyline will begin when an amnesiac angel appears on Aziraphale and Crowley’s doorstep, throwing them back into another end-of-the-world adventure.

While Good Omens might be far away, The Sandman hits Netflix on Aug. 5.