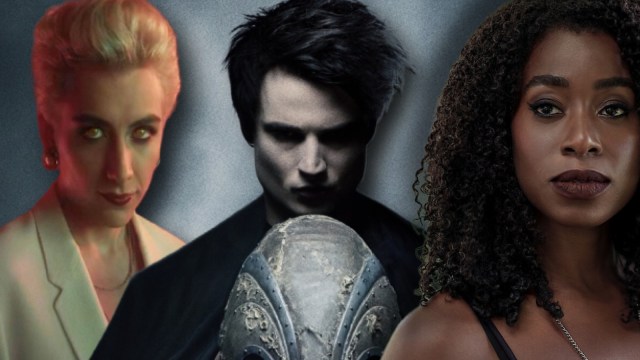 Anyone following Neil Gaiman on Twitter will know he’s bowled over at the success of The Sandman on Netflix. Even after other high-profile TV projects like Good Omens and American Gods, his cult classic 1990s horror/fantasy comic remains the work closest to his heart and he clearly wanted to make sure it was done right.

Gaiman was involved at every level of production, from casting right through to filming and promotion – even making a very subtle appearance in the show by voicing a character in A Dream of a Thousand Cats. Now, with the future looking bright for a second season, he’s opened up about which characters he’s looking forward to seeing.

In an interview with Comicbook.com he said there’s one member of the Endless he can’t wait to meet and another he wants to see more of.

“Delirium is always, she’s, I mean, Delirium. I loved Delirium because she wrote her own dialogue. Most characters, you have to start at the page and turn things over in your head and carefully type it out, and all I would ever have to do for Delirium is come up with a really good straight line and then I type what she said and it’s like, okay, this is great”There’s a part of my brain that always supplies Delirium lines. So, I mean, she’s, for me, she’s just my favorite and an absolute delight.

Fans of the comic will know that Delirium is literally a ‘delight’ and we’ll doubtless see her and the rest of the Endless when the show tackles the Seasons of Mist storyline in episode 2. So far we’ve seen Dream, Death, Desire, and Despair – with Destiny, Delirium, and the mysterious ‘Prodigal’ to come later.

Of these Delirium will be the trickiest to get right. Her spacey and surreal dialogue runs the risk of sounding self-consciously ‘random’ when spoken aloud rather than read, so we hope the show repeatedly underlines the sadness and loss baked into the character’s story arc.

But there’s another major character that we all want to spend more time with.

“Having said that, there’s Kirby Howell-Baptiste because she fills the screen as Death. She is absolutely there, as lovable and as kind and as good as I’ve ever hoped for my Death today. So I would love to see more of her as well.”

The Death-centric ‘The Sound of Her Wings‘ was our favorite episode of the first season, so we can only agree.