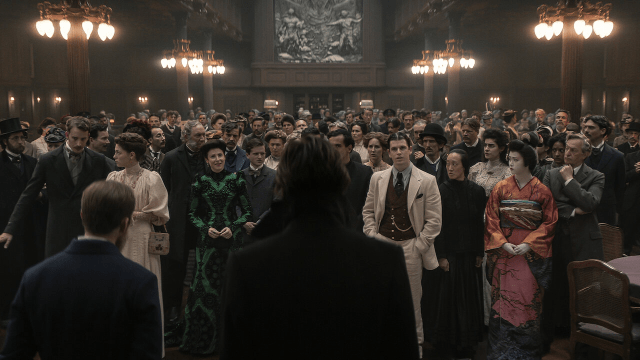 Netflix’s tendency to leave its scariest projects for after the Halloween season shouldn’t come as much of a surprise to anyone by now; after all, we know that the streamer’s bullish and much-scorned crackdown on password-sharing, perhaps their most horrifying project of all, will be taking place early next year, well after Halloween has passed.

Nevertheless, an equally scary, infinitely more welcome entry in the history of Netflix will also be finding its way to our post-spooky season queues in the form of 1899, a highly-anticipated, chilling new mystery-horror series that has finally offered us a palpable, ominous look into what we’re in for.

From the minds of co-creators Jantje Friese and Baran bo Odar, who previously teamed for Netflix’s critically-acclaimed German sci-fi series Dark, 1899 follows a group of European migrants who have paid good money to be chartered across the perilous waves of the Atlantic Ocean, hoping to eventually land in New York City and start new lives. But after responding to a message by the mysterious “Prometheus,” another, mysteriously empty migrant ship that has found itself astray at the high seas, the dangers of rough waters become the least of the migrants’ worries.

A lucky few have already been given a taste of this haunting new venture from Friese and bo Odar, as the series’ first two episodes premiered at the Toronto International Film Festival earlier this year, and with the creators having long since won the trust of audiences with Dark, it doesn’t seem like a stretch to say 1899 won’t wow us in a similar fashion.