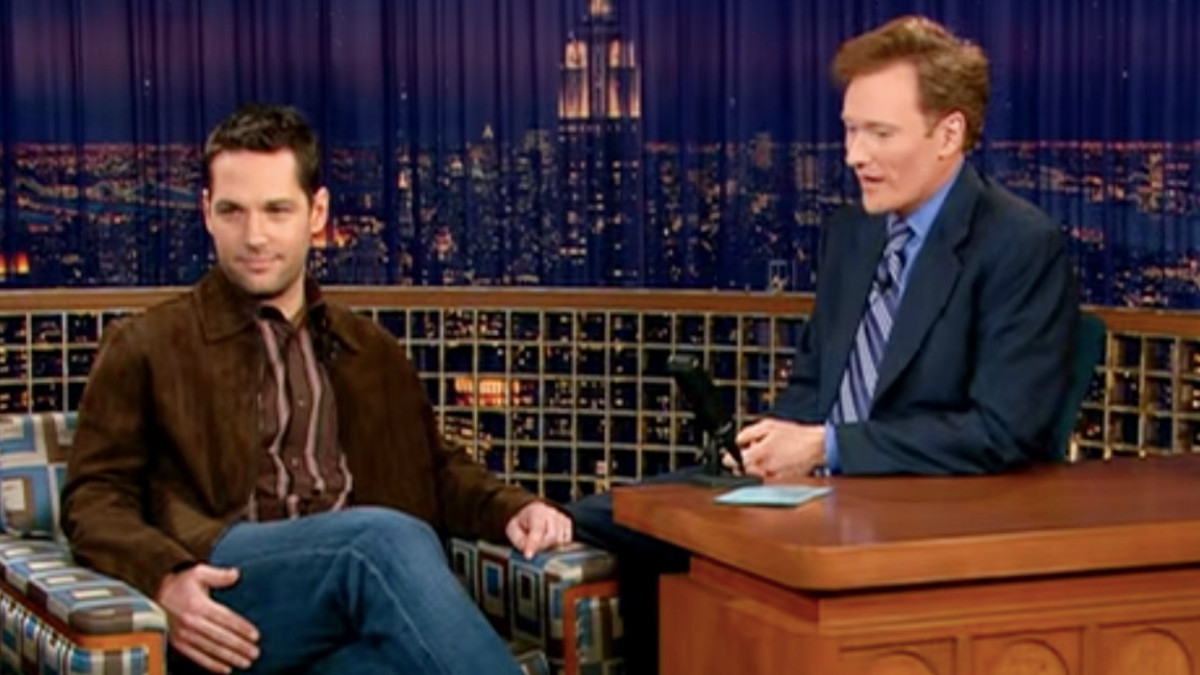 Paul Rudd successfully pranked Conan O’Brien yet again this week by running a clip of the 1988 cinematic dud Mac and Me during an episode of the host’s podcast, Conan O’Brien Needs a Friend. He managed to do so despite the fact that a podcast is not a visual medium — but that seemed to be neither here nor there for Rudd. (And thankfully, they tweeted a video clip to capture O’Brien’s irritated and amused reaction.)

In the most recent incident, Rudd claimed to have had a clip of an entirely made-up project he was working on, but typically, the 52-year-old uses it in lieu of a movie or television show that he’s actually supposed to be promoting.

And no matter how much he promises that this time, he’s going to show the real clip — it’s always Mac and Me, every time, and sometimes even multiple times in the same interview.

By our count, this marks the 11th time Rudd has pulled that stunt on Conan — which seems almost absurdly low, considering how long he’s been at it — always with a smirk on his face and a twinkle in his eye. Here’s how the prank started, as well as every project Rudd has preempted with the clip over the years.

The first time Rudd got O’Brien with the Mac and Me clip occurred when the actor stopped by NBC’s Late Night with Conan O’Brien ahead of the Friends finale in 2004. For obvious reasons, details about the final episodes were kept tightly under wraps, but Rudd claimed to have brought one regardless.

“I actually brought a clip from the final episode,” Rudd told Conan. “I think there’s a lot of interest.”

2006: A theatrical production of Three Days of Rain on Broadway

“Last time I didn’t show it, because I was here for Knocked Up and Judd Apatow said, ‘You’re not gonna show that,'” Rudd admitted in that instance, after O’Brien noted his guest’s love for running the clip. Conan also pointed out that Apatow literally flew across the country to ensure that Rudd wouldn’t run the Mac and Me clip.

This also marked the first instance that Rudd got Conan twice, after promising to run the real clip the second time.

While promoting My Idiot Brother in 2011, Rudd likewise promised to run the real clip the second time — but only made it a few seconds before it abruptly cut to Mac and Me.

In 2013, Rudd was in the middle of filming the sequel to Anchorman when he showed up to Conan on TBS in costume, so at least this time he wasn’t actively promoting the film. Yet, he still got the audience’s hopes up when claiming to have a never before seen clip of the Adam McKay comedy. Alas, it was Mac and Me.

“Get out,” ordered O’Brien, after Rudd hoodwinked him twice.

While promoting Marvel’s Ant-Man, both Rudd and O’Brien went into the clip acknowledging that, obviously, for such a big-budget movie, he couldn’t pull the prank again. And true to his word, Rudd did run a clip from the franchise blockbuster … which was naturally edited to include the scene from Mac and Me, to Conan’s chagrin.

In 2019, Rudd couldn’t even behave himself even while plugging his short-lived Netflix series.

2021: A clip of the worst Saturday Night Live sketch ever

Rudd stopped by during one of the final episodes of Conan — crashing an interview with Bill Hader, who had been recalling a Saturday Night Live sketch featuring the actor that was allegedly so bad that it didn’t make it past dress rehearsal. “Thankfully, they do film the dress rehearsals,” said Rudd, fooling even Hader, who seemed to believe him.

He also finally provided an explanation, of sorts, of why he first got the idea into his head to replace clips of his hard-worked projects with Mac and Me.

He also claimed that he couldn’t decide between a clip from Mac and Me or another wild-sounding clip from the 1999 film Baby Geniuses, and even offered to run the other clip. Without watching, we can probably all guess how that panned out.

“I just remember the very first time, thinking, ‘It’s so artificial to come on and sell your wares and show a clip from your movie … What if I just show a clip from another movie?’ We’ve never talked about this, really, but I thought, ‘What if I show this clip from a movie I saw a really long time ago that is just really strange?”

With O’Brien gearing up for his upcoming weekly variety series on HBO Max, it seems unlikely that he’s seen the last of Mac and Me.