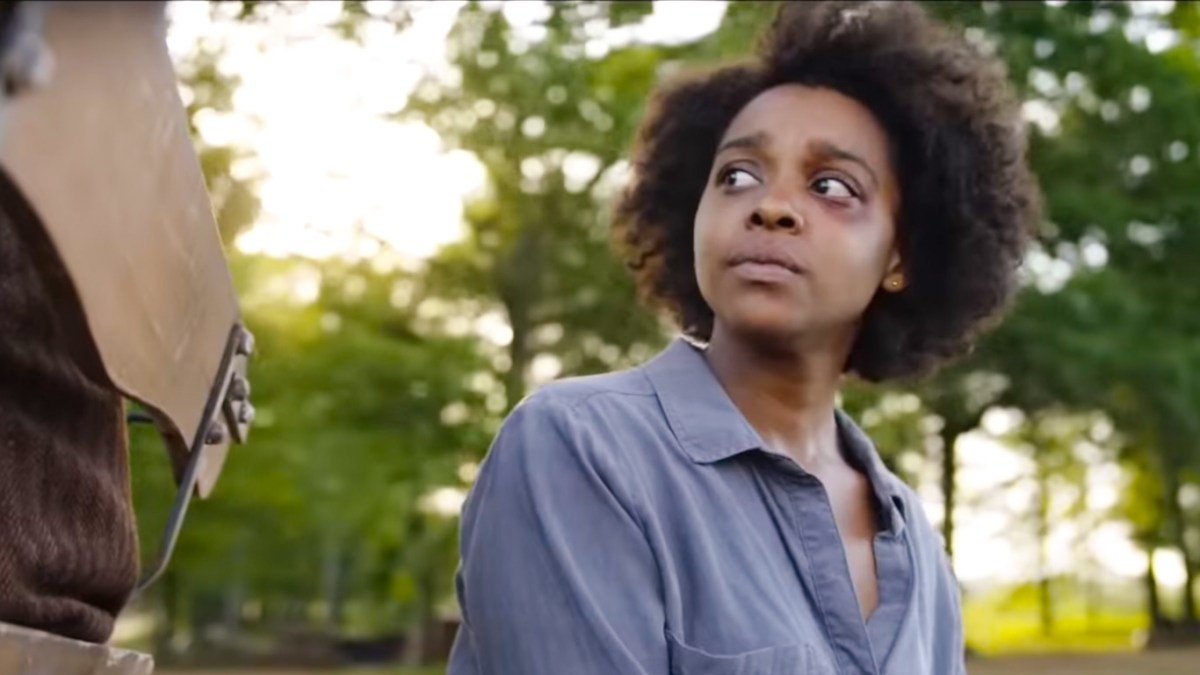 From producer Branden Jacobs-Jenkins, who helped usher in Watchmen alongside Damon Lindelof, comes Kindred, a time- traveling drama set circa 1816. One which puts Mallori Johnson (WeCrashed) front and center as Dana James.

Having uprooted herself from New York to settle in Los Angeles, much of episode one concerns itself with establishing character and circumstance. Dana is an aspiring television writer, who binges old seasons of ‘80s mainstay Dynasty and seems incapable of buying home furnishings. With relatives based locally who are both overly protective and mildly resentful, Dana faces an uphill struggle settling in.

In that opening hour Dana encounters Kevin (Micah Stock), a waiter who gets her home from a restaurant when she is left stranded. Although convenient in terms of storytelling, their chemistry is something which continues to convince as Kindred carries on, meaning audiences will learn in time to overlook the cliché. However, although their relationship is pivotal to what follows, there is no denying that this particular element smacks of a laissez-faire approach to adaptation which robs this show of depth in those early stages.

Although Kindred is based on some solid source material in Octavia E. Butler’s novel, it seems to lack the depth that a novel on this scale deserves. As the series bounces back and forth in time trying to maintain a sense of dramatic momentum, there is too little for audiences to cling on to in terms of character. Conversations might allude to mental instability within the family, which in turn links into the time travel elements, but that does little to keep any dramatic blood pumping.

Having discovered that her mother is still alive after a car crash which apparently killed both parents — Kindred reveals its key piece of dramatic information. Once audiences realize that the pivotal element here revolves around getting everyone back to their own time, things start taking shape. Snippets of action which had felt quite fragmented begin making sense, while Dana starts understanding how her family are bound together.

However, once the central conceit has been revealed and Kindred starts making sense, there is still no avoiding some unpleasant facts. As a premise, although Kindred hits the ground running, it tends to lag in those early stages, tying itself up in knots with time travel. For examples of a show which handled it better, audiences need look no further than The Time Traveller’s Wife featuring Rose Leslie.

There may be some nice moments between Dana’s next door neighbors Carlo (Louis Cancelmi) and his wife Hermoine (Brooke Bloom), but a convoluted sub-plot concerning domestic abuse feels superfluous. As Dana jumps back and forth through time, lashing out in panic upon her return, injuries incurred to Kevin’s neck which underpin that abusive subtext feel lazy.

Furthermore, when both Dana and Kevin go back to 1816 a little later on, it takes time for the world to become genuinely convincing. This has nothing to do with the presence of plantation owner Thomas Weylin (Ryan Kwanten) or his wife Margaret (Gyle Rankin), but a feeling that hinges on production values not coming up to muster. Although the plantation house is period specific in construction and décor, there are a limited number of trappings that convince elsewhere.

Other shows that subtly dealt with race and its relationship to contemporary society include Us and The Underground Railroad, while Jordan Peele’s Get Out cinematically subverts the horror genre into something akin to social commentary on the topic. That is where this Kindred adaptation falls short, to be honest, since its revered feminist source material, which so eloquently explored issues of identity, race and culture, feels under-represented here.

Young David Alexander Kaplan, who plays Rufus Weylin, can only do so much in establishing that inextricable bond between Dana and himself. That she keeps getting pulled back to aid him at various points, speaks to the topics which Octavia E. Butler sought to address, yet never really hammers that home on screen. A fact which will fundamentally disappoint anyone familiar with the original work.

That being said, although this adaptation might not succeed in tackling hard-hitting topics with quite the same force as Watchmen, FX turns Kindred into more than a just a dramatic diversion capable of killing a few hours.

Review: 'Kindred' falls short of its source material in this lacklustre adaptation

Scuppered by issues of momentum in the early stages, Kindred fails to deliver the goods.