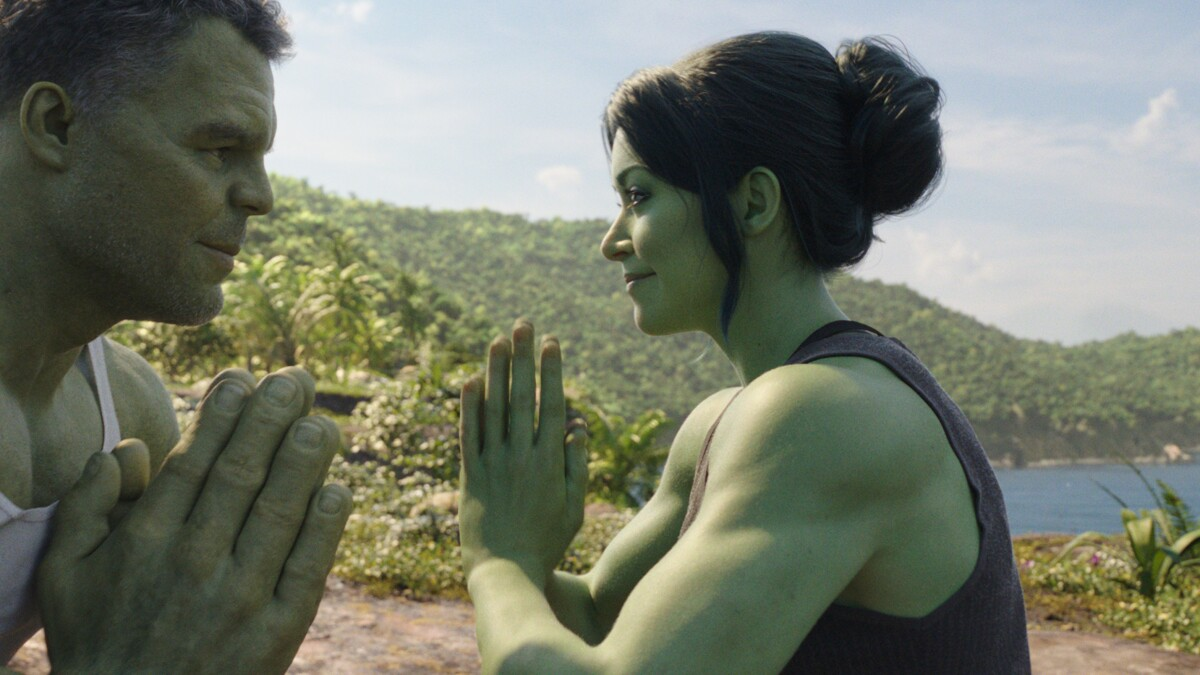 Image via Disney Plus
Review of: Review: 'She-Hulk: Attorney at Law' is a return to form for the MCU

Tatiana Maslany turns heads and turns green in this savvy Marvel series, which breathes new life into the MCU.

What women wouldn’t want to be perpetually gym fit, genuinely statuesque, and bright green with a She-Hulk swagger?

This show asks the question from the outset, introducing Jennifer Walters (Tatiana Maslany) to eager audiences alongside her cousin Bruce Banner (Mark Ruffalo). Created in the biblical sense by Stan Lee and then streamlined in this iteration by head writer Jessica Gao, She-Hulk: Attorney at Law is instantly worth investing in.

In the opening episodes, fourth wall breaking establishes a direct connection, which Tatiana Maslany handles with style. She is charming, disarming, and for the most part, carries audiences along into an extended flashback that does away with any further need for exposition. There may be some naysayers who object to the Amazonian depiction of feminine perfection, but it soon becomes clear there are two sides to every coin.

With great strength and genetic advantage comes corporate concern, as public perception in this modern age is everything. Being able to consume vast amounts of alcohol without a hangover is one thing, but to be a seven-foot poster campaign for Sports Illustrated who throws benches through walls is quite another. That is the conflicting debate around female empowerment versus objectification, which gives this show depth throughout.

Episode two broadens the canvas a little more and allows Maslany wiggle room within her performance to play. Prior to release, She-Hulk: Attorney at Law had been described by some as a superhuman Ally McBeal, which would mix relationship tribulations with the more obvious transformation conundrum. That is exactly how this plays out, as Maslany grounds Jennifer by playing on her imperfections.

As a character, she is intelligent, determined, and driven, yet Jennifer still tackles the uncertain landscape of personal relationships with an added obstacle. In terms of expectations going into She-Hulk, audiences would best be served by checking out HBO’s Perry Mason, in which Maslany rules. There is a certain amount of comfort to be had from knowing the quality of an actor going in. Maslany has a self-assurance that goes toe to toe with Ruffalo and matches him.

Audiences also have the promise of Daredevil and Abomination making an appearance at some stage, which easily makes this worth the price of a Disney subscription. With the recent announcement of an eighteen-episode Daredevil show, subtitled Born Again, She-Hulk is guaranteed to attract more than just the Marvel masses. There is also something to be said for the return of Tim Roth, who seems to have been short-changed in all this, following his turn as Abomination back in the Edward Norton days.

Then there is the matter of Titania (Jameela Jamil), who makes a splash in episode one and has been mooted as this season’s big bad. On the evidence in hand, it is fair to say some people might question Jamil and her ability to pull this off. Coming from The Good Place, in which she was excellent, She-Hulk feels like a deliberate change of gear for her that might just be intentionally divisive.

With only a few episodes down, it feels unfair to cast aspersions without all the information, so for now, Tatiana gets a hall pass. Elsewhere, things are much more cut and dried as solid writing and decent chemistry between Jennifer and best friend, Nikki Ramos (Ginger Gonzaga), ensure the show is not purely Hulk-centric.

Beyond the little niggles, which focus primarily on female representation in this show, head writer Gao seems to have nailed it. There is a lightness of tone which offsets anything overtly dark in the beginning, while more than anything, Maslany really brings something special to this character. Alongside Ruffalo, who has been playing Bruce Banner forever at this point, there is a reassuring confidence on screen.

For audiences who had their doubts about bringing She-Hulk into the MCU, rest assured those concerns can now be banished. It has been a long time since a Marvel standalone show had swagger, but with this one, that is all about to change. With this debut off to the smoothest of starts, it is only a matter of time before Jennifer Walters is integrated into Marvel’s ever-expanding multiverse.

Review: 'She-Hulk: Attorney at Law' is a return to form for the MCU

Tatiana Maslany turns heads and turns green in this savvy Marvel series, which breathes new life into the MCU.