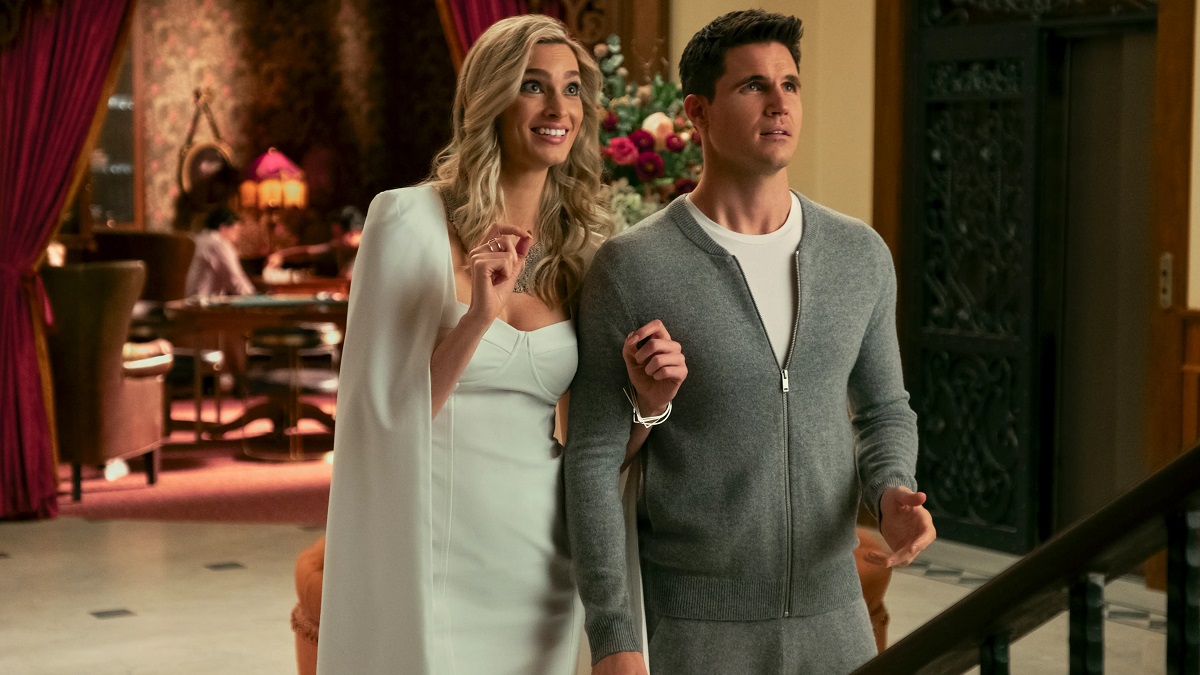 Review of: TV Review: 'Upload still proves that the afterlife has something for everyone'

Greg Daniels is an super-producer responsible for numerous television shows, including Parks and Recreation, The Office, and more recently Space Force on Netflix. Never afraid to poke fun at an establishment which remains ripe for mockery, Upload continued that trend in 2020.

Debuting on Prime Video, the series introduced Nathan Brown and Nora Antony, played with an affable edge by Robbie Amell and Andy Allo respectively. Upload embraced the simple premise of a digital afterlife with intellectual savagery, an approach which proved extremely popular and coincidentally timely with a global population in isolation due to COVID-19.

Packed full of comedic invention and grounded by Allo and Amell on sparkling form, Upload fooled everyone into thinking it was lightweight. With picture-perfect suburban homes and a techno savvy populous, the show made the most of solid production design to draw audiences in.

Only once everyone was comfortable did the series take a heavy swing at contemporary politics, whilst satirically setting about America’s healthcare system with a flaming scimitar. That Greg Daniels also used rom-com dynamics as a smoke screen to hide his tub thumping never even registered.

Not only that, but he even managed to take cultural potshots at a class system defined by wealth and privilege but made it mainstream, something else that somehow got ignored. A second season was ordered just seven days after the first run of episodes landed, which is one of the benefits of airing exclusively on streaming.

Amazon are neither creatively reliant on shareholders, nor overly concerned by Nielsen ratings, so Daniels and his ensemble can offer audiences a second season that hits the ground running, even if it takes a little time catching people up before diving back into Lakeview.

To begin with, Allegra Edwards’ Ingrid Kannerman gets more time on the playing field, being both an uber-bitch and devoted fiancée to Nathan. It’s a role which requires skill and consideration from Edwards, as the only thing keeping Ingrid interesting are the conflicting agendas that define her. Socially awkward, genetically entitled, yet desperately in need of companionship, it’s a mix which gives the actor the opportunity to pull off pathos and comedic commitment in equal measure.

Other returning players include Kevin Bigley as Nathan’s best friend Luke, who continues to be an effortless foil to any number of inappropriate situations. Given this is all avatar-based humor, Upload isn’t afraid to cross the line into salacious territory. Whether that involves pimping people out for digital download time, or finding deviant ways to enjoy a game of tennis. Beyond the inventive flights of fantasy which Lakeview affords its showrunner, Upload does come burdened with a story which carries straight on from season one.

It taps into the contemporary issues of identity theft, online cyber crime and big business subterfuge, yet somehow fails to engage. That’s partly because the characters are why audiences will keep watching, rather than any plot points which keep things moving. The dynamic between everyone from Zainab Johnson’s Aleesha to Josh Banday’s Ivan Spelich is solid, meaning that viewers are likely to follow them anywhere. Likewise, whether Nora is making new friends like Paulo Costanzo’s Matteo, or going on a field trip to New York with Nathan, Upload never feels pedestrian.

William B. Davis remains engaging as billionaire avatar David Choak, allowing Greg Daniels to tip his hat to an X-Files legend, while veteran actor Alex Kliner will soon become a favorite to fans familiar with his previous work in Altered Carbon amongst others. A special mention should also go out to Owen Daniels, too, the eponymous A.I guy who plays numerous characters and yet remains an inherently blank canvas.

As audiences would expect, this second season does a lot more than just repeat old tricks or revel in past glories, as Daniels takes aim at another contentious topic, one that’s certain to raise the heckles of a small minority, as he subtlety continues to chip away at those who think money makes them better people.

It’s an opinion that obviously holds little sway with this particular showrunner, who passes comment without compunction, by turning Nathan Brown into a latter-day Robin Hood. That’s just one of countless subplots in a second season that takes an episode or two to find its mojo, before wrestling that sucker into submission and reminding audiences what made Upload so special in the first place.

TV Review: 'Upload still proves that the afterlife has something for everyone'