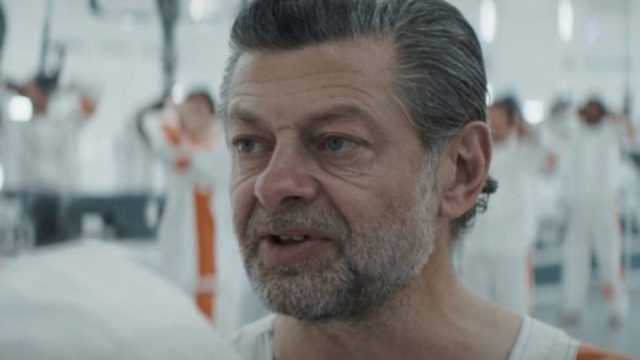 The Lord of the Rings and The Planet of the Apes star Andy Serkis is no stranger to Star Wars. He provided the performance capture and voice for Supreme Leader Snoke in the sequel trilogy, though it’s safe to say his unexpected arrival in Andor‘s eighth episode is leaving that role in the dust.

Serkis plays morally conflicted prison work foreman Kino Loy, who’s torn between his desire to quietly get through his remaining sentence or join Cassian Andor’s escape plan. Revelations about the true nature of the prison last week have led him to side with Cassian, and we’re desperately hoping he makes it through tomorrow’s prison break episode.

Now, in an interview with Collider, Serkis has opened up on his return to Star Wars and his admiration for Tony Gilroy’s Rogue One:

“I was a huge fan of Rogue One, and that was what made me want to come back into the universe, despite the fact I knew it was going to cause a huge amount of speculation, and going through the whole of this thing again. I just didn’t want to be part of making people’s lives more complicated than they already are, to work out what I was doing and coming back into.”

He went on to explain that he couldn’t turn this part down:

“But as soon as I talked to Tony Gilroy…and as I say, I was such a big fan of Rogue One, and we talked about the part. I love the world that he creates, the everyman kind of aspect of the film of Rogue One, and then as you say, the gray areas, the complexities of all of the characters that go into this amazing, amazing odyssey. And not least of course, working with Diego and who’s just phenomenal, but such a great cast of actors. And every single character, rich, beautifully drawn, extraordinarily kind of complex. It was just a treat to come back into it.”

Serkis previously underlined that, despite the predictable fan theories, there’s absolutely no connection between Kino Loy and Snoke, though we’re hoping the Andor character sticks around to become part of the Rebellion. The fight against the Empire needs people like Kino Loy who can get stuff done and know how to manage people.

Then again, we’re also preparing ourselves for him to heroically sacrifice himself to save his fellow inmates. Let’s just hope he takes down a couple of Imperials along the way. At least if he goes out, it’s in a blaze of glory.