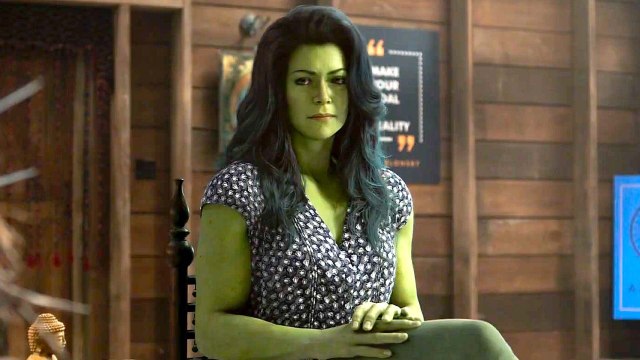 Jennifer Walters is coming to smash sexism in the MCU. She-Hulk: Attorney at Law finally introduces Bruce Banner’s similarly afflicted cousin into live-action, and in doing so she’ll be challenging the “boy’s club” atmosphere that’s arguably built up in the franchise over the past 14 years. At least, that’s according to Shulkie herself, Tatiana Maslany.

Ahead of the new series’ premiere on Disney Plus this Thursday, the Orphan Black veteran recalled her first day on set during an interview with The Wrap. Maslany’s first scenes involved Jennifer’s friend Nikki Ramos (Ginger Gonzaga) teaching her how to use a dating app. The actress praised these scenes about “friendship” and “connection” for ensuring the series is “very relatable.”

What’s more, Maslany stressed the importance of material like this for bringing a “joyful, feminine energy” to the Marvel universe that has rarely been showcased before. She explained:

“It was with this joyful, feminine energy that we played in those spaces. And for me, I’ve always had a deeply internalized misogyny about femininity, you know? I have, just like our culture, looked at it in a certain way. And to be able to embody it in this character and to feel my own femininity and express it with this joy was just – it’s a wonderful gift. You know, it’s a bit of a boys club, the Marvel world, a little bit, so it feels kind of revolutionary to have it in there.”

With the likes of WandaVision, Black Widow, and Ms. Marvel, dropping over the past couple years, it’s easy to forget that it took until 2019’s Captain Marvel for the MCU to deliver its first female-fronted movie. So Maslany’s absolutely right that the franchise has traditionally been male-dominated. Likewise, Attorney at Law is really breaking the mold with its emphasis on its protagonist’s work and personal life over her superheroing, which should allow Jen to be a much more down-to-earth lead than most.

That’s probably needed to counterbalance the other side of her character, seeing as Jen will sport the ability to break the fourth wall, making her unique in the MCU — at least until Deadpool enters the fray. She-Hulk‘s marketing has emphasized its wacky humor, but it’s possible that fans will actually gravitate more towards its casual, relatable side. Catch the first episode on Disney Plus from Aug. 18.