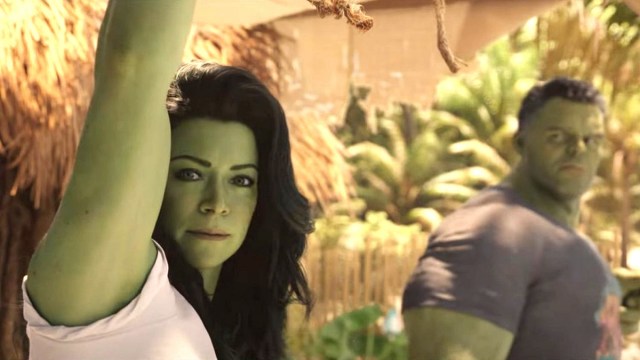 Marvel’s Disney Plus shows have offered up something different each time, and that’s definitely the case with She-Hulk: Attorney at Law. WandaVision might have been a homage to sitcoms, but the Tatiana Maslany vehicle is being pitched as a full-on legal comedy that aims to translate the wild sense of humor of the heroine’s comic book adventures to the screen.

And that includes Shulkie’s patented fourth-wall breaks — she’s been doing it on the page long before Deadpool, don’tcha know. In an interconnected universe with a distinct tone like the MCU, however, pulling off this whole new layer of meta-humor must’ve been tricky. So it’s no surprise to find out that it took a lot of work to figure it out. In fact, showrunner Jessica Gao has admitted that she initially went a little crazy with the fourth-wall smashing and Marvel had to tell her to rein it in.

While speaking to Variety ahead of the show’s premiere, Rick & Morty vet Gao explained:

“Oh we discussed it to death, just over and over. There were two shows that I referenced in my pitch and it was Fleabag and Better Call Saul, hopefully both for obvious reasons. I love fourth-wall breaking, and if I had my druthers, it would just be nonstop — and it really was kind of nonstop in the early phases. It was so much that Marvel was like, ‘OK, calm down, this is too much. She can’t just be talking to the audience the entire time.’”

Gao went on to reveal that at one point Marvel actually banned the fourth-wall breaking altogether. In this version of the show, text boxes would’ve appeared on screen instead, mirroring editor’s asides in the comics. For whatever reason, though, this concept was then scrapped as well and Jennifer Walters got to look at the camera again. The EP continued:

“I might have really overdone it because at a certain point, they even asked me to do a version where there was no fourth-wall breaking, but there was still kind of a meta kind of nature to it. I really love editor’s notes in comics, and so for a span of probably several months, there was going to be editor’s notes that kind of popped up in little text boxes on the screen, and then she would actually acknowledge the editor’s box and argue with the person who was writing the notes. Then we scrapped all of that and decided OK, let’s just let her break the fourth wall: But you know, not as much.”

To be honest, the editor’s notes idea sounds like it could’ve been really fun and given She-Hulk a visual flavor all of its own, not to mention a fresh way of tackling the meta angle. Still, without having seen any of how it actually played out, it’s possible it wouldn’t have worked and Marvel was right to return to the Fleabag-approved method of simply having the character make comments to the audience directly.

She-Hulk: Attorney at Law is coming for that fourth wall when it hits Disney Plus this Thursday, Aug. 18.