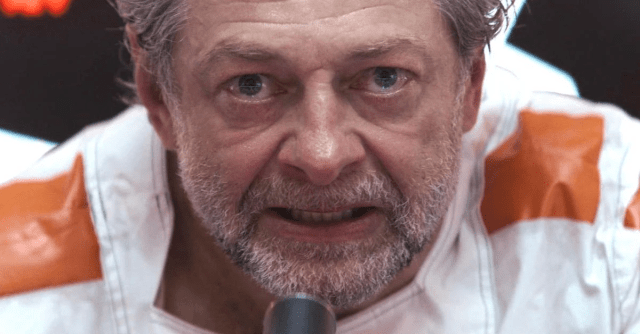 We’ve got two episodes left before Andor goes back into Tony Gilroy’s workshop as it gears up for the second and final season, and while we’re dreading the drought, we’re infinitely more thankful for the soon-to-be 12 episodes of delectable Star Wars intrigue that easily makes a case for being one of the greatest entries the franchise has ever seen.

And the heart, soul, and swagger of it all boil down to the ensemble cast, with Diego Luna leading the charge as eponymous thief Cassian Andor, with the likes of Mon Mothma (Genevieve O’Reilly), Syril Karn (Kyle Soller), and Dedra Meero (Denise Gough) shoring up Andor‘s masterclass in tension with a slew of captivating performances.

But there are two other members of the cast in particular that have been the talk of the galaxy ever since the tenth episode dropped earlier this week, with Andy Serkis’ Kino Loy completing a beautiful but tragic character arc, and Stellan Skarsgård delivering one of this year’s most chilling monologues as Luthen Rael. And as if these two weren’t being praised enough, r/StarWars put together a thread just for them.

One user pointed out how finding good performances in a show like Andor is no difficult task, but perhaps it just makes the work of these two all the more impressive.

Another responder pointed out that this proves that Star Wars is more than capable of giving talented actors the tools they need to thrive in a franchise that has historically drawn criticism in this department.

And one other user gave O’Reilly just as many dues. The soft but sharp power with which she wields the character of Mon Mothma would be a travesty to overlook.

It’s hard to imagine Andor outdoing itself after that last episode, but with the momentum afforded to it by this cast, we could easily be in for a tantalizing surprise.