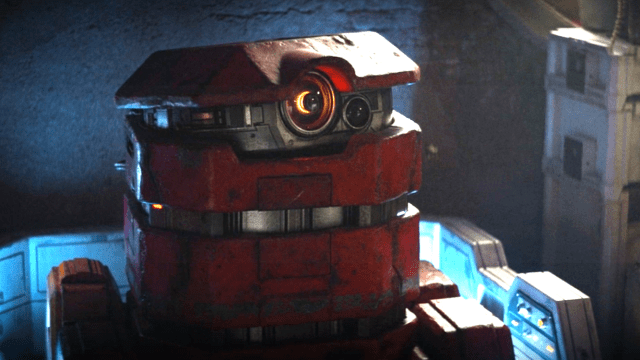 Screengrab from Disney Plus

There’s a lot to process in the first three episodes of Andor. The first quarter of the season has landed on Disney Plus and lives up to the promise of a grounded and emotionally mature Star Wars story. But fans have already picked what might be the show’s stand-out new character: adorable droid B2EMO.

Cut from similar cloth to R2D2, B2EMO – affectionally nicknamed ‘Bee’ – is a groundmech salvage assist unit that seems to have been owned by Maarva Andor for years. The droid is plucky, cute, and despite looking not unlike a small cupboard adorably personable.

And, all too predictably, Star Wars fans have clutched him tightly to their collective bosoms:

Nobody is allowed to be mean to B2EM0:

Many are comparing him to Pixar’s Wall-E:

He is truly adorable:

And yes, they would die for him:

Star Wars has a good track record in keeping cute droids alive, so we’re hopeful for B2EMO’s future. Having said that we didn’t like to see him getting threatened by the Imperial Corporate Guards, so there may be more peril in store for the little red guy.

As episode three ended Cassian and B2EMO were parted, with him remaining with Maarva as Cassian makes his escape to join the Rebellion. Things looked pretty gloomy for Maarva as the third episode ended, though we’re sure the trio will be reunited very soon.

In the meantime, we raise a glass to whoever in the Star Wars droid design department put together B2EMO. Another home run!

Andor‘s first three episodes are airing on Disney Plus.