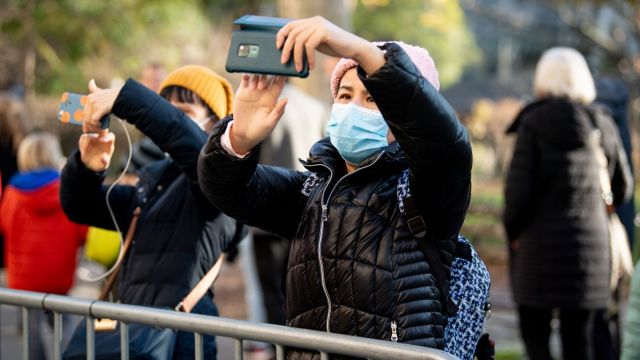 The Macy’s Thanksgiving Day Parade begins today at 9 a.m. ET, and as usual, many of your favorite characters from popular culture will be floating through the streets of Manhattan. In 2021 we saw Ada Twist, Ronald McDonald, Pikachu and Eevee as balloons, though the highlight was a gigantic Funko Pop! inspired Grogu from Star Wars‘ The Mandalorian.

Now it appears that everyone’s favorite pint-size Force user is set to return for his second consecutive year, with pictures from the float preparation showing Grogu inflated and weighed down with sandbags, but still ready to go:

Joining him will be Bluey, Greg Heffley from Diary of Wimpy Kid, a Minion, Papa Smurf, Goku, Smokey the Bear, SpongeBob SquarePants,and the dinosaur mascots of the Sinclair Oil Corporation.

With the excellent Andor now complete, the next big Star Wars live-action release will be The Mandalorian‘s third season, which begins airing at some point in February 2023. Disney Plus viewers recently got a reminder of how just how adorable Grogu can be in the Studio Ghibli short Grogu and Dust Bunnies, released on the service to mark the third anniversary of The Mandalorian‘s debut episode.

Surprisingly for such a gigantic franchise, Grogu’s 2021 float was the first time Star Wars had ever been represented in the parade, though perhaps there aren’t too many characters that lend themselves quite so well to being turned into giant floats. Even so, we’d have loved to see Darth Vader looming over Times Square in the past, or perhaps BB-8 (who would at least be easy to realize as a balloon).

The Macy’s Thanksgiving Day Parade will be broadcast live on NBC and Peacock from 9 a.m. ET. to noon.