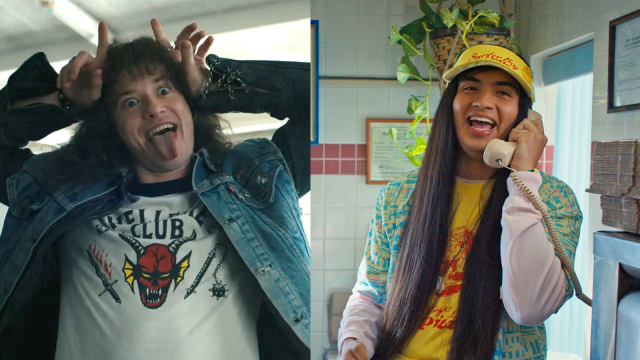 The abundance of unique lines in Season 4 of Stranger Things sparked an intense debate among fans about which one was the most iconic.

Thomas-Sapkota stirred up the topic in the r/StrangerThings subreddit by asking viewers of the hit Netflix series to select the best line of the season. They kicked off the discussion by posting a meme capturing Jim Hopper’s (David Harbour) ironic sense of humor, “Yeah, I always felt I’d be easier to like when I was dead.”

However, the general sentiment among most Redditors was that Argyle (Eduardo Franco) had most of the best lines in Season 4. Unbridled-Attention post of the quote, “Got me stressed out and it’s not even my girlfriend,” was upvoted over a thousand times.

Keefe28 thought the best line was from the scene when Argyle is driving down the street, listening to the Musical Youth classic Pass The Dutchie, and says, “Byers is having a party and not inviting me? That’s not cool, man.”

Another school of fans argued that the distinction belonged to Eddie Munson.

Csimar11 nominated the moment when Eddie asked, “Are you ready for the most metal concert in the world?” before delivering a head-banging rendition of Metallica’s Master of Puppets.

Ri-chanRenne cast their vote for none other than Eleven’s (Millie Bobby Brown) unique articulation of the line, “I piggybacked from a pizza dough freezer.”

Even though Argyle’s humorous banter dominated the thread, it’s clear that there is a wealth of impressive lines to choose from. Perhaps the Redditor’s fondness for Argyle speaks to the wonderful fun his character brings to some of the heavier topics discussed in the multifaceted sci-fi series.

All four seasons of Stranger Things are streaming on Netflix.