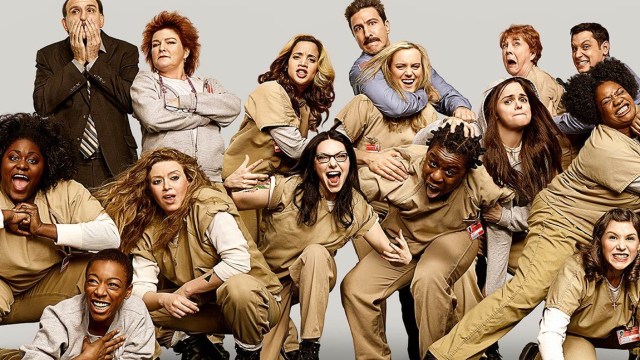 Like many other television shows, Netflix’s comedy-drama Orange Is the New Black is character-driven. Without its ensemble cast delivering unforgettable performances, Jenji Kohan’s adaptation of Piper Kerman’s memoir Orange Is the New Black: My Year in a Women’s Prison (2010) would have never received multiple Primetime Emmy nominations, six Golden Globe Award nominations, an American Film Institute award, and a Peabody Award. Although a substantial amount of credit is owed to the talented writers’ room, whose hands-on collaboration helped bring these storylines to life, there’s no denying that Orange Is the New Black‘s stand-out cast led the series to global fame and critical acclaim.

Even before Orange Is the New Black aired, the Kohan-Netflix vessel needed little promotion; name value alone was enough to entice a large portion of viewers. Natasha Lyonne, who plays the lovable lesbian junkie Nicky Nichols, had already made a name for herself as Megan Bloomfield in But I’m a Cheerleader and Jessica in the American Pie franchise. Likewise, Kate Mulgrew, who plays the hot-headed but prideful Head Chef, Red, had already established herself a loyal following for portraying Captain Kathryn Janeway in the Star Trek franchise. There’s so many Orange Is the New Black characters, all of whom are given an episode dedicated to their backstory, and while not all of them are particularly endearing, there are those who’s presence is felt at all times. These are the best Orange Is the New Black characters, ranked by overall impression.

Gloria Mendoza, who briefly takes over for Red as Head Chef in the Litchfield kitchen, has a complicated history with domestic abuse and was arrested and sentenced for food-stamp fraud. Played by Selenis Leyva, Gloria was often seen as Red’s competition, commanding the Hispanics and Latinas until Maria Ruiz became a self-made gang leader in later seasons. On more than one occasion, Gloria was at odds with Aleida while competing to be Daya’s maternal figure, which stirred up plenty of juicy drama behind bars. While she can be volatile at times, Gloria is the over-protective mother we all wish we had, and Leyva has some of the best one-liners in the entire seven-season run. What’s not to love about Gloria, really?

Yael Stone’s Lorna Morello is a series regular in Orange Is the New Black, often coddling Natasha Lyonne’s Nicky, with whom she has an on-again, off-again relationship. When we first meet Lorna, she’s head-over-heels for Nicky, but at war with herself over her “true love,” Christopher. There’s definitely an angel and a devil sat on her shoulders playing tug-of-war with her emotions. As one might have guessed within a few minutes of meeting Lorna, she was arrested for stalking the real-life Christopher, whom she met spontaneously and went on one coffee date with. Aside from stalking, Lorna was mainly convicted of intent to harm after planting a bomb under Christopher’s wife’s car. She undergoes a serious transition while incarcerated, driving herself mad with delusions of marriage and babies — a future which is just beyond her reach. Lorna is entertaining and unpredictable yet somehow relatable — and there isn’t much to dislike about Stone’s knock-out portrayal.

We couldn’t possibly leave out Laura Prepon’s Alex Vause, the woman of the hour. Vause is modeled after Piper Kerman’s real-life girlfriend, Catherine Cleary Wolters (known as Nora Jansen in the memoir), whose drug trafficking and money laundering lifestyle ropes Piper in as a willing accomplice and leads to her year-long sentence. Often described as the “sexy librarian” and “the hot one,” it’s safe to assume that Alex was intended to be attractive enough so that her crimes and betrayal to Piper seemed less irredeemable. Before Orange Is the New Black, Prepon had held the spotlight as Donna Pinciotti on the Fox sitcom That ’70s Show, but as Alex, she floored us all with her convincing range and emotional vulnerability. Like so many others, Alex has some of the best lines in the whole show, but she also provides some comedic relief that — at times — feels desperately needed.

Without a doubt, Taryn Manning’s Tiffany “Pennsatucky” Doggett has the most captivating and impactful character arc of all the Orange Is the New Black characters, which in turn makes her one of the best. In the beginning, Pennsatucky is a devout Christian (emphasis on devout) whose beliefs dictate her entire existence, and if anyone disagrees or besmirches the name of God, there’s Hell to pay. Although she’s introduced as an irritating, loud-mouthed Jesus freak, Pennsatucky starts to understand that religion isn’t an escape from reality and learns some hard life lessons that humble her and help her realize that Jesus won’t always be there to bail her out of tough situations. From Season 2 onwards, Pennsatucky endures a lot of heartache and earns ample sympathy, showing us all that she’s just a damaged soul walking the path of righteousness. Although she was arrested for straight-up murder, we’ll let that one slide.

Uzo Aduba’s award-winning performance as Suzanne “Crazy Eyes” Warren deserves to be ranked even higher, but unfortunately, there’s more popular and prominent characters ahead of her. Although the series revolves around Piper, it wouldn’t be overstatement to say that Crazy Eyes is the unofficial mascot of Orange Is the New Black. Aduba is sensational as Warren, there’s no denying that, but when paired with her co-stars, she really shines. Warren’s interactions with her fellow inmates are comedy gold, and while a lot of her lines make no sense, there’s a method to her madness that actually makes her quite profound and wise. Suzanne was arrested for involuntary manslaughter after a young boy named Dylan dies after being “kidnapped” by her, although to hear her tell it, she and Dylan were friends. Although she has the mental capacity of a five-year-old, Suzanne makes us laugh, cry and everything in-between.

It would be ‘criminal’ to not include Orange Is the New Black‘s leading lady, Piper Chapman, played by Taylor Schilling. There’s a lot of pressure to tell Piper Kerman’s story in a compelling and somewhat factual way, but Schilling encapsulates every fleeting emotion that Kerman must have felt while serving her time. It wouldn’t be a stretch to say that Schilling carries the responsibility of portraying Kerman accurately while still adhering to Hollywood standards, but she nails it. There’s no denying that Piper isn’t always pleasant, but even when she’s behaving like a dictator, there’s some realness to her personality that makes her nothing less than human; the choices she makes aren’t always the right ones, which only proves that the moral compass inside all of us turns slightly askew now and then. Piper cycles through multiple personalities through the course of the series, so at different points in time, she represents different human psyches, which makes her one of the most personable characters.

It’s still too soon. Poussey Washington, played by the incomparable Samira Wiley, meets her tragic end in “The Animals,” the penultimate episode of Season 4, after CO Bailey accidentally suffocates her during the chaos that ensues after the Litchfield guards attempt to disband a peaceful protest. Poussey was incarcerated for possession of weed, which is probably the most tame crime out there, and only proves that Poussey wouldn’t harm a fly. It doesn’t matter how many times we say it, Poussey didn’t deserve to die, and her loss left behind a giant void. She will always be remembered an important part of the Orange Is the New Black legacy, and the uproar among fans following her death solidifies how much of a beloved character she was. She’s the carefree, fun-loving character that wants to break free from the stereotypical cycle of poverty surrounding Black people and become more than the indigenous troublemaker society labels her as. Poussey was the heart and soul of Orange Is the New Black, and we’re saying it again because it can’t be said enough.

Don’t act surprised, you knew Nicky would be here somewhere. Natasha Lyonne was so convincing as Nicky that Orange Is the New Black fans (who were unfamiliar with Lyonne prior to the show’s release) actually thought she was a lesbian in real life. Sadly, she isn’t, which is a loss for the LGBTQ+ community. From the get-go, Nicky was a fan-favorite character, acting as the jokester of Litchfield with her puns, quips and witty one-liners. Since she was a teenager, Nicky has struggled with a crippling heroine addiction and has attempted to get clean a dozen times over. In fact, she was arrested for breaking and entering while in possession of heroin, which she calls her “best girlfriend.” There’s so many moments where Nicky shines, but while she’s the class clown, she’s also a victim of emotional abuse at the hands of her mother, who frequently gaslighted her. Natasha Lyonne, like Laura Prepon, was another piece of eye candy for the Orange Is the New Black fans — and we aren’t complaining.

Of course, the legendary Kate Mulgrew lands second place. Even before Orange Is the New Black, Mulgrew was a global sensation from her recurring role in Star Trek, but her portrayal as a hot-headed Russian certainly earned her international recognition. Red was arrested for co-conspiring to hide bodies in the freezer of her restaurant, where she baked her famous piroshkis, and encouraging multiple murders. In Litchfield, she’s the flawed mother figure to several inmates, whom she affectionately calls her “family.” Although her methods are questionable, Red has good intentions at heart and only ever tries to look out for her own. She’s often considered the mother hen of Litchfield, offering guidance and advice to her followers. There’s something about Red — whether it be the Russian accent, mannerisms or proverbs — that just makes her exceedingly likable. We can’t quite put our finger on it, but Mulgrew delivers a noteworthy performance as an even more influential character.

Again, it’s still too soon. Danielle Brooks’ Taystee tops the list — and no one is surprised. Even though Taystee was essentially used as a plot device to accentuate the corrupt nature of the justice system and the oppression of Black people, she’s still the best character that Orange Is the New Black has ever had. There’s a lot to unpack with Taystee, and Brooks embodies her with so much passion and pride that her personality becomes infectious. We all want a friend like Taystee. She’s energetic, playful and zealous, always standing up for what she believes in, especially where her friends are concerned. Brooks manages to make Taystee both manic and sensitive, truly encapsulating the full range of human emotions to portray a character whose life encounters multiple ups and downs. Taystee was imprisoned for trafficking heroin for Vee’s drug ring, but she later received a life sentence (which we still haven’t forgiven Kohan for) after being found guilty of murdering Piscatella — a conviction that was staged by the COs. Taystee goes through a lot, but she remains her true self throughout, which is totally admirable and one of many reasons to love her.