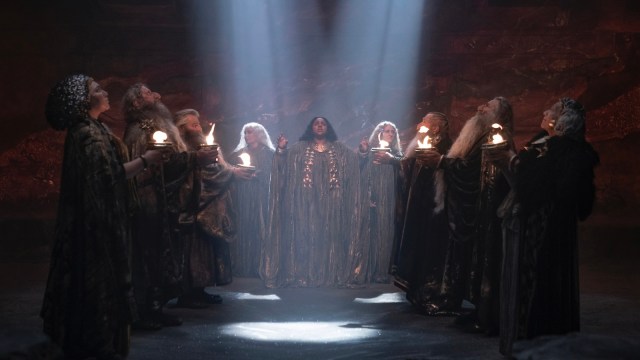 Lord of the Rings: The Rings of Power has delved into the Second Age of Middle-earth, and with that comes a whole host of new characters, locations, and mythology that Tolkien wrote for his fantastical world (alongside some characters that the showrunners added using artistic license). Alongside the Harfoots, the Númenorians, and the Ñoldor Elves we have also been introduced to the dwarves of Khazad-dûm, inhabitants of one of the greatest dwarven cities in Middle-earth.

Fans of the Lord of the Rings films have visited this location once before, only at that time (in Middle-earth’s future) it is known as Moria, the Black Pit. To compare the Moria of the films to the one we have seen in The Rings of Power, we can see the stark difference between the two, with centuries having passed between. In the Amazon Prime series, we are seeing Khazad-dûm at the height of its power, with the dwarven kingdom thriving, its magnificence and splendor aon full display as Elrond seeks to establish a working relationship between the dwarves and the elves.

But who are these dwarves and what is their history? Their lineage is one that goes back to the very creation of their race and one of the Seven Fathers of the Dwarves, Durin the Deathless.

Who is Durin the Deathless?

The world and all that is, known as Eä, was first created by the god Eru Ilúvatar with the assistance of the Valar, who fashioned Eä and resided in the land of Valinor. One of the Valar, Aulë, wanted to pass on his skill and craft and, unable to wait for the creation of the firstborn children of Iúvatar, the elves, fashioned the race of dwarves, making them strong and hardy with near unbreakable wills. He could not give them independent life though and after his creations were discovered by Ilúvatar, who stated that Aulë had overstepped his bounds by trying to create life, he repented, promising to destroy them. Seeing that the dwarves had some spirit, Ilúvatar instead adopted them and instead sent them to sleep until his firstborn children had awakened and resided in Eä for some time.

Durin was the eldest of the Seven Fathers of the Dwarves and was set alone to sleep under the Misty Mountains during the Years of the Trees. When he was finally awakened, still within the First Age, he set off across Middle-earth, traversing land that no one had ever stepped foot on before, naming the mountains along the way. He headed south, and finally came to a long oval lake that looked magical in nature, described in Tolkien’s The Fellowship of the Ring novel thusly: “There, like jewels sunk in the deep shone glinting stars, though sunlight was in the sky above”. Durin saw the reflection of the stars as a crown over his head and believed it to be a sign, so he named the lake Kheled-zâram or Mirrormere.

Above the lake lay three mountain peaks and Durin chose the eastward-facing caves to settle and there founded the House of Durin. His people went on to be named Durin’s Folk or Longbeards. Durin’s long reign as the first king of Khazad-dûm is hailed as a golden age; it became the biggest of all the dwarf houses, and the period was known as Durin’s Day, which was also used for the dwarven new year (as seen in The Hobbit).

Durin the Deathless was so named as he far outlived the normal life span of any dwarf but, unlike the Elves, he was not immortal and died aged over 2,395 years at the end of the First Age, his tomb residing in Khazad-dûm. It is believed that Durin will be reincarnated in his descendants six times over, which is why they are many named Durin up till Durin the Last, or Durin VII.

Khazad-Dûm in the Second Age

The Rings of Power shows us Khazad-dûm during the second age, during the reign of Durin III with Elrond visiting his son Durin IV, an old friend of the elf and Prince at that time. The subterranean dwellings have since grown in strength and population as they welcomed the vast amount of refugees from the dwarven homes of Belegost and Nogrod that were destroyed at the end of the First Age in the battle against Morgoth. These dwarves were Broadbeams and Firebeards and further added to Khazad-dûm through their own culture and skills.

The Amazon series presents Durin the IV as more open-minded than his father, with his friendship with Elrond and willingness to form a working relationship with the elves contrasted with his father’s mistrust. Durin the III also appears to have a secret he would rather the elves don’t know about at the end of episode two.

What happens to the dwarves of Khazad-dûm?

The dwarves and the elves do eventually work together in the expansion of the elvish realm of Eregion, and a friendly bond between the elves and the Longbeards is established. With this also came the expansion of Khazad-dûm leading towards Eregion and the West Gate which the great elven smith Celebrimbor and the dwarf Narvi worked together to create, carving “Im Narvi hain echant. Celebrimbor o Eregion teithant i thiw hin: “I, Narvi, made them. Celebrimbor of Eregion drew these signs.” We see this door in the Fellowship of the Ring as the Fellowship attempts to enter Moria. This is also the time when the Rings of Power were made and one of the three given to the dwarf Lords was given by Celebrimbor to Durin III.

Centuries later the dwarves would dig too deep and awaken one of Morgoth’s Balrogs which would go on to kill Durin VI and earn the nickname Durin’s Bane. This Balrog is the very same we see Gandalf take on when the Fellowship tries to cut through Moria. After the death of Durin VI’s son, Náin I, the dwarves abandoned their ancient home.

We will see much more of the Khazad-Dûm dwarves as they work alongside the elves in the Lord of the Rings: The Rings of Power series available now on Amazon Prime Video.