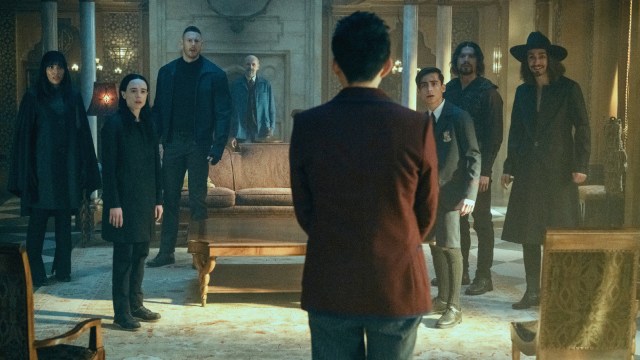 The best characters aren’t always defined by how much love they receive. Rather, it’s more honest to say that the best characters are the ones who elicit a powerful response from audiences (see: Homelander from The Boys, The Falcon and the Winter Soldier‘s John Walker/US Agent, or Dolores Umbridge of Harry Potter infamy).

The revival of Ben Hargreeves for season three of The Umbrella Academy wasn’t quite what everyone was expecting. Gone was the beloved cinnamon roll from the Umbrella Academy, and in his place was the temperamental, Machiavellian Number Two of the Sparrow Academy. The way this new Ben carried himself throughout the show served as a nasty surprise for many, and Justin H. Min, who portrays Ben in the show, has nothing but pride for his provocative performance.

Season three kicked off with the Umbrella Academy landing in an alternate timeline of their home city, where they discover they’ve been replaced by a group of new superpowered adoptees who make up the Sparrow Academy. Ben, a former member of the Umbrella Academy who passed away during the events of season two, was picked up as a baby by Reginald Hargreeves in this alternate timeline to be part of the Sparrow Academy.

You’d have to be caught up with the hit Netflix show to fully understand the nuances, but the bottom line is: Ben was the Umbrella Academy sweetheart for the first two seasons, the new Ben in season three is the resident sourpuss, and Min is eating up all the hatred for his character.

The Umbrella Academy is available to stream on Netflix.