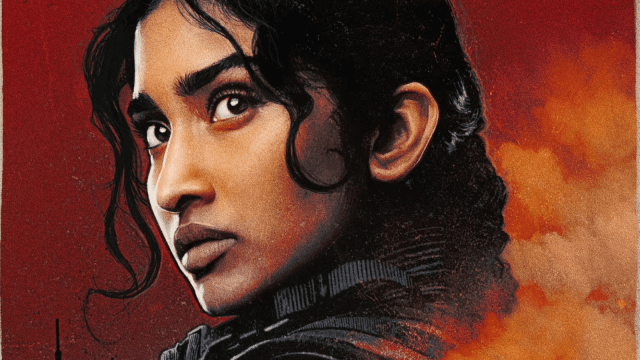 With two-thirds of Andor’s run done and dusted, Cinta Kaz actor Varada Sethu participated in a Q&A for Twitter TV, in which she revealed that she may or may not have dropped and broken Han Solo’s gun, an important and iconic Star Wars prop.

Sethu prefaced that she’s still unsure as to whether or not it was actually the gun Harrison Ford used in A New Hope, or simply the gun that would canonically come to be in his possession, but she did get a briefing from the show’s art department that she was holding a piece of Star Wars history.

She recounted how the events unfolded – and apparently, it all went down not too long after the art department’s words of caution.

“I was respectful for all of two minutes, because then I started to get a bit cocky, I was just, you know, in between setups and takes, I was just like spinning it on my fingers and like having fun with it, and of course I’m not as slick as Cinta is, and I dropped it and I broke it. I mean, it wasn’t irreparable, but yeah – that was quite funny.”

Perhaps Sethu’s fumble can be forgiven, considering she said the damage was repairable, and also because she’s quickly been capturing the hearts of Andor fans after the reception she got for being in one of Star Wars’ first openly gay couples, which sent the fandom into an absolute uproar.

Episode 9 of Andor will hit Disney Plus on Nov. 2, 2022, with three more episodes to come after that.