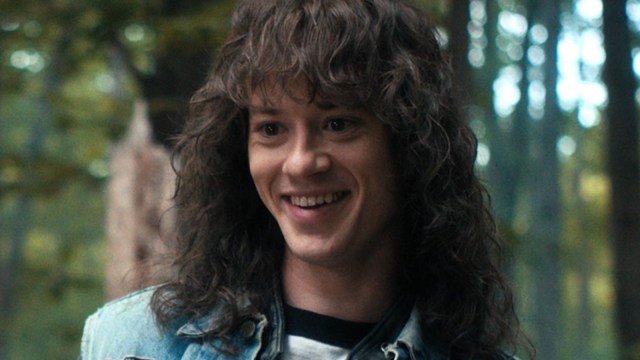 The second volume of the fourth season of Stranger Things is finally here, with Netflix dropping the two movie-length episodes on July 1, 2022. We finally get to learn what the trailers were alluding to and what happens to all our favorite characters in their fight against Vecna.

One of the newest characters to join the Stranger Things franchise was an instant fan favorite; Eddie Munson, played by Joseph Quinn. Eddie is the leader of Hawkins High’s Dungeons and Dragons club, a drug dealer, and plays in a band. Throughout the first volume, they constantly teased Eddie’s guitar, and we all expected him to play something awesome in Volume Two, so what epic song did he play and why?

As the team in Hawkins decides on a plan to defeat Vecna, they agree that the Demobats need to be distracted for everyone else to close in on Vecna. So Eddie’s time in the spotlight was finally here. He grabbed his guitar – which looked even cooler in the Upside Down – stood atop his trailer and started to shred.

Eddie’s song of choice was “chef’s kiss” as he rocked out on Metallica’s Master of Puppets. And their plan worked, with all of the Demobats flocking to Eddie’s trailer. Eddie and Dustin drew them there and barricaded themselves in the trailer, riding off the high that came from Eddie’s metal performance.

Unfortunately for the pair, the Demobats proved to be more than they bargained for and managed to enter the trailer through the vents. Saving Dustin by severing the connection to the Upside Down after he got back to Hawkins, Eddie decided to face the Demobats himself. After leading them around the Upside Down on a bike, Eddie stood his ground and fought the Demobats off with a spear and a makeshift shield. Eddie unfortunately was discovered by Dustin after the battle had ended and Vecna had been killed. Eddie was badly beaten up by the Demobats and unfortunately, Eddie succumbed to his injuries and died in the Upside Down.

Even though Eddie died, at least we got a wicked performance out of him before he did. Although, there’s nothing stopping Eddie from returning in the fifth season of Stranger Things as it would not be the first time a character returned after their death, at least to haunt the living.