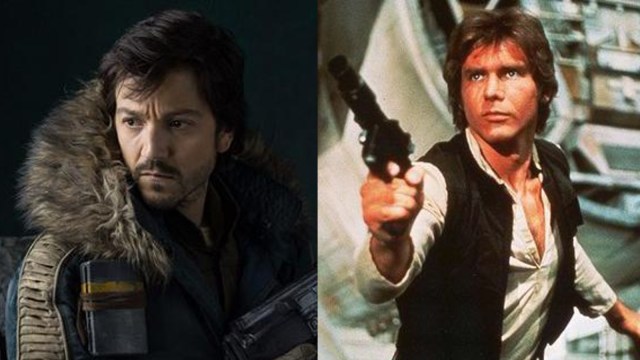 Star Wars characters cross each others’ paths frequently, but the characters from Rogue One: A Star Wars Story have been famously isolated from much of the galaxy. Andor starring Diego Luna takes place before Luke Skywalker’s journey begins and before the many other legendary characters come into play, but the recent episode revealed that Han Solo and Cassian Andor have a surprising connection.

In Andor episode four, “Aldhani,” Luthen Rael (Stellan Skarsgård) and Cassian travel to the planet Aldhani. They are sent on a mission to join a group of rebels who are planning to steal the quarterly payroll of an imperial site and he’s given a special kyber crystal necklace. Andor isn’t eager to go on this adventure, and as he tells Luthen his story, he brings up that he fought in the Battle of Mimban when he was only 16 years old. He was in prison before being thrown into the battlefield, and he’s only one of 50 who survived.

As it turned out, this isn’t news to Luthen. He knows that Andor was in the famed battle, and he also knows that he wasn’t a soldier. Instead, Cassian was a cook. When Luthen says that Cassian lived because he ran, you could see a sense of shame on Andor’s face when the truth is revealed. Luthen goes on to say that the Empire had them fighting each other, and that should make him hate them all the more. He knows Andor better than he thinks he does, and the scene reveals that his story intersects with Han Solos’.

In Solo: A Star Wars Story, Han Solo (Alden Ehrenreich) also fought in the Battle of Mimban. It was a planetary war between the Galactic Empire and the Mimbanese Liberation Army during the early years of the Imperial Era. Solo fought in the muddy swamp world as a corporal alongside swamp troopers in a ground assault to take a Mimbanese ridge. After they were attacked by explosives that killed their leader, Major Staz, the team convened in a trench and came up with a new tactic. They captured the ridge under the leadership of Tobias Beckett (Woody Harrelson), but Solo wasn’t satisfied.

There wasn’t much time to celebrate after the mission. Lieutenant Alayus Bolandin informed them that they’d be going to the Southern Marshlands in just a few hours, and Solo chose to speak up. He asked what the Empire’s true motives were on Mimban and implied that the Imperials were the enemy. Bolandin knew that Solo would be in trouble, and Solo knew he had to get out of there, and he conspired with smugglers to commandeer a Y-45 armored transport hauler. However, the smugglers turned on him and told Bolandin that he was trying to desert the Imperial Army, and he was thrown into a pit with a “beast.”

That “beast” turned out to be everyone’s favorite Wookie, Chewbacca (Joonas Suotamo). Chewie attacked Solo at first, but he convinced the Wookie to join forces with him by relying on his limited knowledge of Shyriiwook, the language of the Wookies. He explained how they could get out of their predicament. Chewie breaks the beam supporting the latch above, and they make their escape. This is the first glimpse at their partnership as they successfully make it to the hauler. Beckett and his group were so impressed that they allowed him aboard, and they leave the war behind.

Both Solo and Andor were in the Battle of Mimban, but in different circumstances. Andor was a cook and Solo was a corporal, but they defected because they didn’t believe in the war. The similarities don’t stop there, either. Neither are Force-sensitive people in a story where the Jedi reign supreme, and they both start out on the wrong sides of the tracks. They’re thieves who look out for themselves before turning their lives around and join the fight to defeat the Empire. Solo and Andor also happen to be the last names of the lead characters used for their Star Wars projects, adding another similarity to the growing list.

This revelation in Andor once again proves how linked their stories are from the beginning and how people can rise up from the murky depths and save the galaxy.