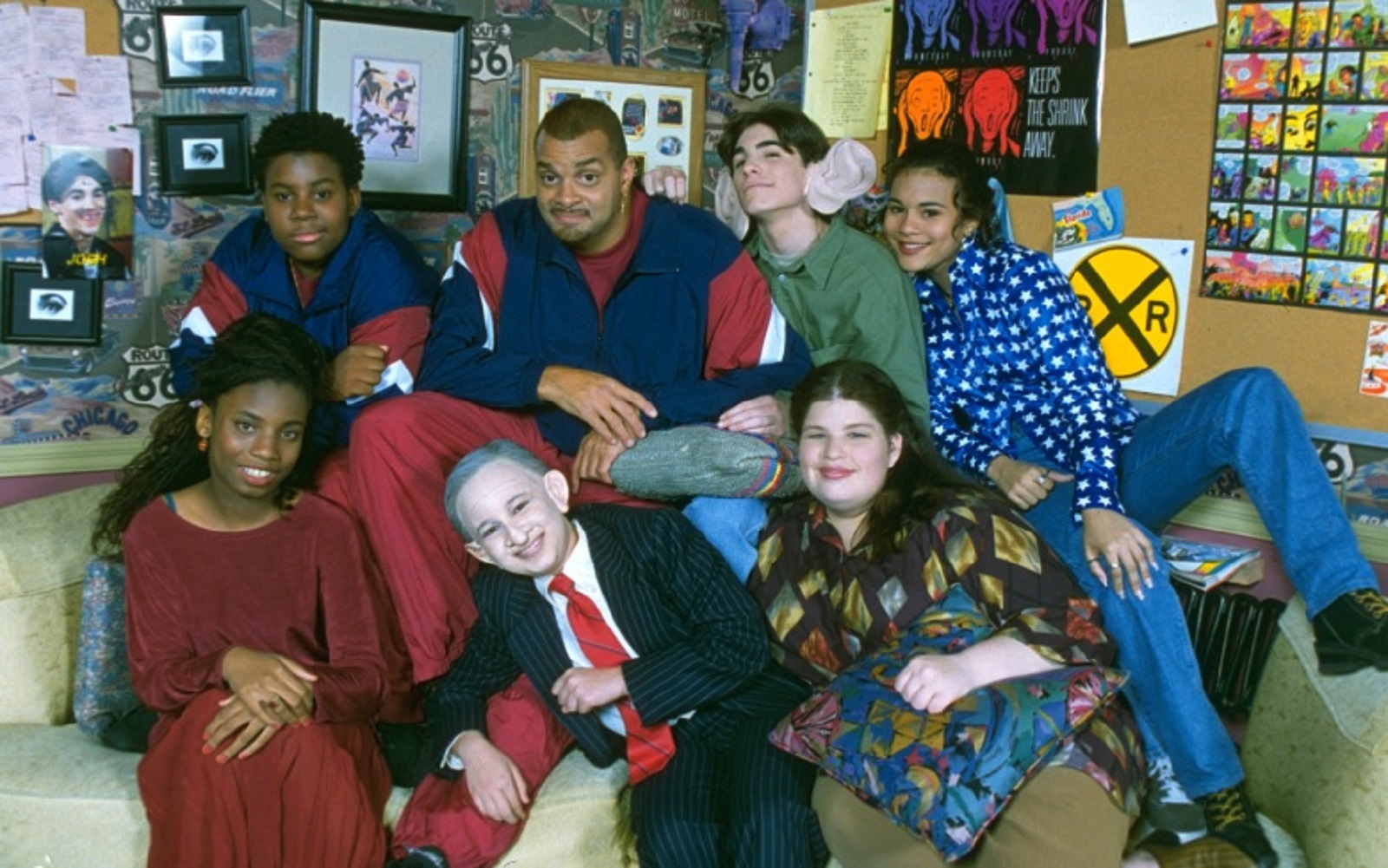 For several years on Nickelodeon, All That was a staple on the super-popular cable television channel for kids. From 1994 to 2005, this half-hour sketch comedy show for a younger audience was rooted in pure humor and was quite wholesome, and it even managed to win a few Kids Choice Awards along the way. It was so good that when it was on, grown-ups could turn their backs on the TV screens in front of their kids or plop right down next to them and enjoy the show.

The cast was diverse, and the content covered a lot of what was cool in pop culture at the time. The program featured the hottest musical talents that appealed to them: TLC, Usher, Run-DMC, and the Spice Girls, to name a few. And they even brought in some popular celebrities to guest-host the show, featuring names like Malcolm-Jamal Warner, Melissa Joan Hart, Shaquille O’Neal, and Mandy Moore.

All That also opened the door for some of their cast members to branch off into separate Nickelodeon sitcoms, and for some, even further into longer-lasting careers in entertainment.

But what have all those cast members been up to since spending all that (see what we did there) time making kids laugh? The seven members of the original cast when the series started in 1994 are featured below.

As one of the original cast members that were on board from the very first episode, Kenan Thompson is the most well-known star that appeared on the show after his six seasons of work, from 1994 to 1999. His most notable bits featured him as “Pierre Escargot,” a bathtub-bound young man who was comically far from being the best French-speaking person in the world. He was also seen as “Miss Piddlin,” a funny lunch lady who had an even funnier affinity for peas, among a handful of other hilarious characters.

Thompson first branched off from All That in 1996 with a sitcom that he starred in with fellow cast member Kel Mitchell, called Kenan & Kel. After starring in two shows for Nickelodeon, not to mention movie roles in D2: The Mighty Ducks, D3: The Mighty Ducks, Heavyweights, and Good Burger, Thompson was off with some small appearances in both movies and TV shows. But it was in 2003 when his sketch comedy skills were back in the limelight when he joined the cast of Saturday Night Live and never looked back.

He is the longest-tenured cast member at 19 seasons and is also the longest-serving African-American cast member, even winning a Primetime Emmy Award in 2018. While it seems he’s sticking with SNL, he did recently have his own sitcom on NBC aptly titled Kenan, but it was canceled after only two seasons. Thompson is currently involved with Artists for Artists (AFA), a production and talent company that he co-founded in 2021.

Just as funny as his castmate Kenan, Kel Mitchell was a part of All That’s cast for the same amount of time as Thompson was. He also co-starred with Thompson in the Kenan & Kel spinoff and also in Good Burger, the feature film based on the popular All That sketch.

After his time on Nickelodeon, Mitchell went on to do some great voice acting as “T-Bone” on the popular PBS Kids animated show Clifford the Big Red Dog, earning two Daytime Emmys during his four years in that role. After that, he found work in all sorts of media, from music video cameos and hosting gigs to small roles in various movies. He even got as far as a second-place finish in 2019 during the 28th season of Dancing with the Stars.

Most recently, in 2019, he became a youth pastor at a local Los Angeles church and in 2022, also wrote a book entitled, Blessed Mode: 90 Days to Level Up Your Faith.

Another very well-known name from the show’s original cast is Lori Beth Denberg. She was there from the start of the show until leaving following the end of the fifth season in 1998. While a part of the cast, she is most notably known for her “Loud Librarian” bit, one who ironically made loud, obnoxious noises only to yell at other library patrons to keep their own noises down. But nothing of hers was more popular than her “Vital Information” segment, which was definitely hilarious and perhaps a kid-friendly version of SNL’s legendary Weekend Update segment.

During that time, she was also featured as a panelist on the Nickelodeon game show Figure It Out and had a small role alongside some of her All That castmates in the movie Good Burger in 1997. Once she left the network, she was cast in a supporting role as Lydia Liza Gutman on The Steve Harvey Show from 1998 to 2002. She then a small role in the 2004 comedy, Dodgeball: A True Underdog Story.

After that, she found a little more work over the last decade and a half with a number of appearances in popular comedy shows like Malcolm in the Middle, Workaholics, and Wild ‘n Out. She most recently competed on the twenty-fourth season of Worst Cooks in America, which just aired on Food Network.

Out of the original seven cast members, Server is the only one that stuck around through all of the show’s first six seasons, 1994 to 2000. He gained laughs in the “Life with Peter and Flem” sketch alongside Kel Mitchell. But his best bit was as an inept investigator that constantly made his fellow officer’s jobs harder as “Detective Dan”. He also appeared in Good Burger, as well as the game show Figure It Out.

After All That, Server hosted the animated anthology program Oh Yeah! Cartoons on Nickelodeon from 2000 to 2001, and then made several appearances in various shows such as 100 Deeds for Eddie McDowd, Drake & Josh, and Ned’s Declassified School Survival Guide. He has also made recent “reunions” with his former All That castmates at national comic-cons and television shows.

Just this year, Server has made an appearance on a buddy comedy show called “Warped!”, on – you guessed it – Nickelodeon.

The OG Cast Wasn’t Complete Without Some More Great Talent

As one of the lesser-known members of the original cast, Angelique Bates was the first of the OG cast to leave the show, stepping away in 1996. Though her departure was relatively quick, she’s still known as the first Black female cast member in the show’s history. And while she didn’t have any skits of her own that were memorable, she was still a major player on the show. After All That, she appeared on shows like Strong Medicine, Boston Public, and Tim and Eric Awesome Show, Great Job!, but now hosts her own podcast, The Evening Showdown.

Katrina Johnson was there from day one but also left earlier than some of the other cast members. She exited in 1997 after four seasons, but put in some memorable impressions as former Presidential candidate Ross Perot and Roseanne Barr and got lots of laughs as the “Lemonade Scammer,” a fan favorite during her time. After that, she actually stepped away from acting to become a flight attendant before getting back into the craft in 2009 with roles in Shane on You, alongside her former All That castmate Angelique Bates, and She’s a Fox. She has since then retired from acting.

And Alisa Reyes, who also left the show in 1997, was one of the other castmates that really made the diversity of the cast shine. After leaving the show, she found steady work with numerous appearances on hit tv shows like NYPD Blue, ER, Boston Public, and Six Feet Under, to name a few. She also voiced La Cienega Boulevardez on the very popular Disney animated hit show The Proud Family. Reyes also returned for Nickelodeon’s 2020 reboot of All That but has most recently made a return to voice acting, reprising her role as Boulevardez in The Proud Family: Louder and Prouder on Disney Plus.