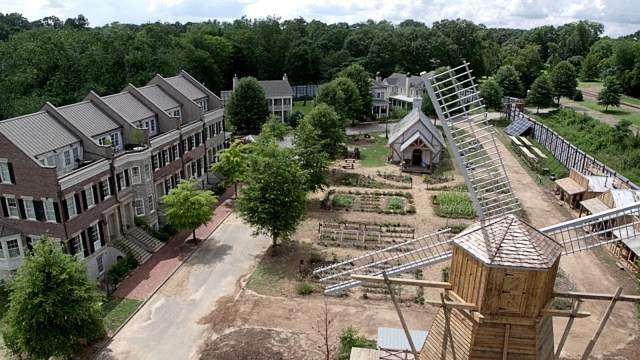 The community known as Alexandria is one of the central locations in the show The Walking Dead, but where is it supposed to be located in the world of the show? And where is the physical set of Alexandria in real life?

Alexandria is one of four joint communities known as the Coalition, with the others being the Hilltop Colony, the Kingdom, and Oceanside. With the full name being Alexandria Safe-Zone, the now-walled community originated as a state-of-the-art upscaled planned community that included solar panels and eco-based sewage, with prices for the homes ranging from $800,000 – $1.4 million.

Where is Alexandria in the world of the show?

When the zombie apocalypse happened in The Walking Dead, Alexandria was repurposed as a quarantine zone by the U.S. military in order to provide a place for politicians to live, including Tevoah Feldshuh’s Congresswoman Deanna Monroe.

Given the community’s function to house politicians, it only makes sense that Alexandria is located in Virginia, approximately six miles from Washington D.C., according to Undead Walking.

Where is Alexandria in real life?

In real life, there is a city called Alexandria in Virginia. However, the Alexandria Safe Zone in The Walking Dead is not filmed in the Old Dominion. Instead, a real-life neighborhood in Senoia, Georgia is where the Alexandria scenes have been filmed for the past eight years.

What’s extraordinary about the Alexandria location is that some people actually live in the Senoia neighborhood where it’s filmed and are occasionally asked to turn off their lights at home or avoid certain streets when scenes are being filmed and are compensated for their troubles. As The Atlanta Journal-Constitution noted:

“Currently, seven families live in the neighborhood, dubbed the Gin Property, five of whom have been there since 2014.”

Scott Tigchelaar, one of the residents in Senoia and a real estate developer who built 10 homes there, has even said Rick Grimes actor Andrew Lincoln once personally thanked him for letting them film in the neighborhood.

AMC also built quite a few structures in the neighborhood for use in The Walking Dead. But amazingly, instead of building basic home facades with no interior amenities, AMC actually built 10 fully-functioning houses with full plumbing and HVAC. Those homes will now soon be up for sale.

With The Walking Dead wrapping up their 11th and final season, it was also reported that the iconic corrugated metal walls of Alexandria — which were put in place to keep the zombies out — will soon be torn down.

The Walking Dead‘s final couple of episodes premiere weekly on Sundays, with the series finale airing on Nov. 20.