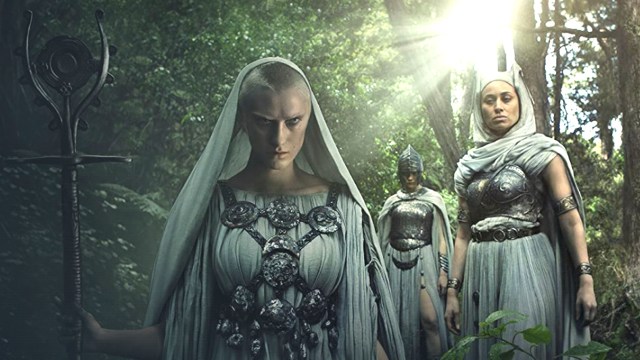 There are still so many mysteries left in Lord of the Rings: The Rings of Power, and we may not get all our answers in the season finale this week. Of course, the big question on everyone’s mind is, “who is Sauron?” But, there are other mysteries beyond this that still need a lot of explaining. One of which is the presence of the white-robed characters, who don’t currently seem to fit any of the characters written by Tolkien, leaving fans more than a little puzzled. They appear to be seeking the enigmatic Stranger through Middle-earth and have shown interesting abilities that have yet to be explained.

They were all deceived

When the trailer for Rings of Power dropped at San Diego Comic-Con, fans were sure they had seen a first look at Sauron, a scowling character with piercing blue eyes dressed all in white and sporting a bleach blonde buzzcut. Many took to social media to speculate on the character with some misidentifying the actor as Anson Boon, who is reported to play Sauron once he eventually makes an appearance.

The actor was in fact Bridie Sisson, and after her appearance, along with two other robed figures in episode five, fans have gone off the idea that this could be Sauron, given that there are three of them looking very similar and they seem to be seeking The Stranger for some reason that, yet again, is unclear. Though, in the enigmatic way of the show so far, we can never fully discount that perhaps Sisson is playing one of Sauron’s forms, as the Dark Lord took on many throughout the Second Age in order to manipulate others.

Despite having only been on screen for less than five minutes in total their impact has been huge. In the credits, they are given the interesting titles, The Nomad (Edith Poor), and The Ascetic (Kali Kopae) with The Dweller (Sisson), appearing to lead the trio. They are also referred to as the mystics by Amazon Prime which, given their white-robed attire, fits them quite nicely.

Where do they hail from?

In an interview with Time, executive producer, Lindsey Weber addressed the initial rumors that Sisson’s character was Sauron, whilst evading any real answer, stating

We are enjoying all the speculation online and can tell you Bridie Sisson is an incredible actor. We also thought fans might like to know that her character is traveling from far to the east—from the lands of Rhûn…

Tolkien enthusiasts likely already know that the lands of Rhûn are the lands east of Middle-earth that are often not included in the map. This is where the Easterlings we saw in Two Towers and Return of the King hail from, and where Sauron went to gather his strength and raise his army of men, which creates an interesting connection between him and this trio.

The area is not much explored in the books, not even by Gandalf who spends much of his time traveling, though Aragorn did have an unrecounted excursion there at some point. Out of the five Istari (wizards) that came to Middle Earth, two chose to stay in the East hoping to turn those there away from Sauron, they were known as the blue wizards Pallandro and Alatar. There doesn’t appear to be any characters fitting the description for these mystics in Tolkien’s work, other than the blue wizards, which makes it very hard to pin down who exactly they may end up being.

How are they able to use magic?

These mystics have shown remarkable abilities so far, able to track The Stranger merely by touching something he has also touched, as seen in episode seven. They also either have the ability to move very quickly, or disappear and appear, which was shown when Nori tries to trick them and they appear rather abruptly behind her. When attacked with fire by Nori’s father, Largo, The Dwellar takes the flame and uses it to burn the Harfoot’s carts and food before disappearing once more, marking them as characters who wield magic for evil rather than good.

Their use of magic begs the question of what race the mystics are. Beings who are known for being able to wield such powers are usually the angel-like Ainur, which is what the wizards and even Sauron are. Elves are also known to use magic, with some, like Elrond, granted the gift of foresight. Galadriel was known to be one of the strongest elven magic users in all of Middle Earth having learned directly from the Valar (strongest of the Ainur).

These characters do not appear to be elves (for now at least) though they could well be lesser Maiar that served Morgoth and Sauron in the First Age. During this time Morgoth was known to have corrupted Maiar and turned them into Balrogs, like the one seen in Fellowship of the Ring and at the very end of Rings of Power, episode seven (which is one and the same). These three could possibly be Maiar who joined Morgoth without being corrupted in the same way.

Another opinion is that they were men (as in race, not gender), cultists of either Morgoth or Sauron in the past who taught them sorcery. Later on from the events currently happening on screen, when Sauron worms his way into Numénor, he manipulates Ar-Pharazon and the Númenóreans into worshipping his old lord, Morgoth, building up a cult of worshippers, with Sauron himself serving as the high priest. Some Tolkien fans have compared this with the white-robed characters here, even though they are much earlier on in the storyline.

It is also worth looking at how Sauron has given others abilities and powers beyond their natural inclination in the past. When he makes the rings, he imbues them with his own power, granting the wearer a part of his power. The nine rings that go to the kings of men give them extraordinary abilities, turning them into the long-living Nazgûls or Ringwraiths. Their powers were so that even Gandalf struggled against their leader, the Witch King. This might be the case here as each mystic carries an object – a staff, a shield, and a helm – which could be imbued with magic that the three could be drawing from, similar to the rings worn by the Ringwraiths.

Without having said a word, the mystics have cemented themselves as the most magically powerful characters so far, second only to The Stranger. For many, their appearance foreshadows that of Sauron’s, as it is believed they will aid the Dark Lord upon his return if they are not already doing so. Whether or not they seek The Stranger because he is Sauron, or because he is a threat to Sauron, is unknown at this point in time, with many speculating that he could possibly be one of the wizards, including our beloved wizard, Gandalf.

With only one more episode to go before season one comes to a close, and so much to fit into just that episode alone, it is not expected that it will solve all the show’s mysteries in one go. In the case of these characters’ identities, fans might have to wait a little longer before we learn exactly who, and what, they are.