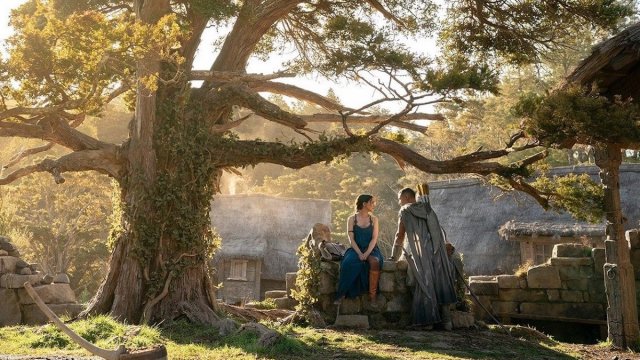 The locations in The Lord of the Rings: The Rings of Power all look stunning, and they might not be beyond reach. Peter Jackson’s Lord of the Rings movies were renowned for their New Zealand landscapes, and in similar fashion, the prequel series returned to the area to bring J.R.R. Tolkien’s world to life again.

Some of the locations featured in Rings of Power include the Mines of Moria, Numenor’s capital city of Armenelos, the Elven realms of Lindon and Eregion, Khazad-dûm, hilly landscapes, fortresses, and castles. For the series, New Zealand’s North Island Auckland was chosen to represent Middle-earth. The area provides a region that’s rich and diverse land to convincingly pull off the mythical realm onscreen.

From Distractify, the Hauraki Gulf/Tikapa Moana was used for filming. It’s a large gulf of the South Pacific Ocean that indents the eastern North Island known for its sparkling blue waters and emerald islands. Piha — a black-sand surf beach on the west coast of Auckland — was also used. Its sights include Mercer Bay Loop Walk and Kitekite Falls. The Coromandel Peninsula in Kaimarama — regarded for its beautiful beaches, misty forests, and altogether calming energy — was another location used in season one. Filming also took place in Kumeu, New Zealand, at the Kumeu Film Studios and Auckland Film Studios.

In a story from GQ, the Denize Bluffs will be used in The Rings of Power and could potentially represent the Harfoot territory. The bluffs were used for part of Trollshaws Forest in The Hobbit: An Unexpected Journey, and considering the fact that Harfoots are a breed of Hobbit, it makes sense to return to the area.

What would a Middle-earth story be without mountains? In Rings of Power, the snow-capped Mount Kidd located in Fiordland at the southern end of the country was chosen. There’s a chance it could be used for The Misty Mountains, or the far darker Gundabad or Caradhras. For now, it remains a mystery.

The ancient mountains found in Central Otago call to mind the Elven glory of Eregion. It’s an inland region with glorious fields and vineyards stretching for miles that could easily pull off the land of the Ñoldorin Elves. Kahurangi National Park is the second largest national park in New Zealand and hosts alpine herb fields and plateaus. It’s vibrant and green with rushing rivers and with untracked wilderness that hikers love to journey through.

The majestic Manapouri is situated at the edge of Fiordland National Park. It has glacier-carved wilderness, and has what’s considered to be New Zealand’s most beautiful lake, Lake Manapouri – that’s dotted with islands. It was previously seen in The Two Towers when Frodo (Elijah Wood), Sam (Sean Astin), and Gollum (Andy Serkis) try and enter Mordor’s black gate.

Many of these locations are already available for tourists to experience or hikers to explore, and with the show, these sites will likely grow in popularity.